Queen Helaena Targaryen was the sister-wife to King Aegon II Targaryen. She was the only daughter of King Viserys I Targaryen by his second wife, Queen Alicent Hightower, and his second daughter overall. Helaena and Aegon had three children: the twins Jaehaerys and Jaehaera, and Maelor. Like her siblings, Helaena was a dragonrider, who rode the dragon Dreamfyre.[1][2]

At the age of thirteen, Helaena was plumper than most Targaryens, and less striking as well. Nonetheless, she was a pleasant and happy girl, and all agreed she would be an excellent mother.[2][3] As queen, Helaena was loved by the smallfolk.[1] Following the death of her eldest son, however, Helaena became depressed and descended into madness.[1]

In 109 AC, Helaena was born to King Viserys I Targaryen and his second wife, Queen Alicent Hightower. She had an older half-sister, Princess Rhaenyra, and an older brother, Prince Aegon, and would have two younger brothers, Prince Aemond and Prince Daeron.[2][4]

By the age of twelve, Helaena had become a dragonrider, and rode the dragon Dreamfyre. In 122 AC, at the age of thirteen, Helaena was married to her older brother Prince Aegon, following the ancient tradition of House Targaryen. Barely a year after her wedding, Helaena gave birth to twins: Jaehaerys and Jaehaera.[2]

On the first day of 127 AC, Helaena's father, King Viserys I, held a feast to celebrate the recovery of his health. According to the court fool Mushroom, after the king had left the feast, Helaena's nephew, Prince Jacaerys Velaryon, asked her for a dance, which her husband and brother, Aegon, took offense to.[2] Later that same year, Helaena gave birth to a third child, a boy named Maelor.[2]

On the third day of the third month of 129 AC, Helaena brought her three children to her father's chambers, where the king, the night before his death, entertained her children with a fictional tale[N 1] about their great-great-grandsire, King Jaehaerys I Targaryen.[1][2]

With the death of King Viserys I Targaryen, a war for succession began. Helaena was informed of her father's passing a day after his death was discovered. When the decision was made to crown her husband, Prince Aegon, instead of Viserys's appointed heir, Princess Rhaenyra, Helaena became a queen. On the day of the coronation, it was Helaena's mother Alicent Hightower who placed the crown upon Helaena's head and addressed her as "my queen".[1]

Unwilling to accept Aegon as her king, Helaena's half-sister Rhaenyra was crowned herself as Queen of the Seven Kingdoms on Dragonstone. While she declared Ser Otto Hightower, Helaena's grandfather, and Dowager Queen Alicent to be traitors, Rhaenyra expressed willingness to forgive Helaena and her siblings, as long as they came to Dragonstone and swore fealty to her.[1]

When Grand Maester Orwyle suggested traveling to Dragonstone to make Rhaenyra give up her claim, Helaena spoke in favor of his plan, together with her mother, after which King Aegon reluctantly agreed to send the Grand Maester under a peace banner.[1] 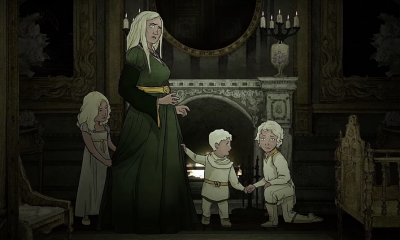 Helaena was accustomed to bring her children by her mother's chambers in the Tower of the Hand every night before they were put to bed. The two men Prince Daemon Targaryen, Rhaenyra's husband, had hired to murder one of Helaena's sons, were aware of this fact. Thus these two men, known as Blood and Cheese, hid in Alicent's chambers, bound and gagged Alicent, and murdered her bedmaid. There, they awaited Helaena's arrival. After killing her guardsmen and barring the door they took Helaena and her children hostage, and forced Helaena to choose which one of her sons would die. Helaena offered herself, but was refused. Threatening to have Blood rape Jaehaera, and to kill all three of her children should she refuse, the two men forced Helaena to make a decision. In the end, Helaena reluctantly named her youngest child, Prince Maelor, who was deemed to be too young to understand what was happening. In response, the two men killed Prince Jaehaerys instead, cutting off his head with a single swing of a sword, and fled with it in hand. After Jaehaerys's death, Helaena became depressed and slowly sank into madness, and refused to eat, bathe, or leave her chambers. Nor would she look at her younger son, Maelor, knowing that she had chosen him to die.[1][5]

Aegon and Helaena slept apart from one another from then on, and after Aegon was severely injured at the Battle at Rook's Rest, Helaena did not even make an attempt to visit him. She had become unreliable as a dragonrider, incapable to fly in battle. When King's Landing fell to Rhaenyra in early 130 AC, Helaena was taken captive.[1]

On the twenty-second day of the fifth moon of 130 AC, at sunset, Helaena jumped from the window of her room in Maegor's Holdfast. She died on the spikes below, with her throat impaled, only twenty-one years old. At the moment of Helaena's death, her dragon Dreamfyre suddenly rose and snapped two of her chains, and roared loud enough to shake the Dragonpit. When Dowager Queen Alicent was informed of her daughter's death, she tore her clothes and cursed Rhaenyra.[6]

The reasons Helaena committed suicide, after half a year of captivity, remain the subject of speculation. Court fool Mushroom asserted that Helaena had been impregnated after being sold into prostitution by Rhaenyra and Mysaria, but Archmaester Gyldayn dismisses the tale of the "Brothel Queens". Grand Maester Munkun proposes the horror of seeing Ser Thoron True and Ser Denys Woodwright hanged drove her to the act, but Gyldayn also dismisses this notion as there is no evidence she witnessed their hanging, knowing the two men as gaolers at best. For his part, Septon Eustace suggests that Lady Mysaria had chosen that night to tell her of the death of her son Maelor and the manner it had happened.[6]

By the nightfall of Helaena's death, rumors were flying in King's Landing that she had been murdered. It was believed it had been done by Ser Luthor Largent of the gold cloaks, at the behest of Queen Rhaenyra,[1][5] for Prince Daeron would soon be at the gates of the city with his dragons. Munkun proposes these calumnies were begotten by the Shepherd, who decried both crime and the queen. Mushroom, for his part, indicates this slander was concocted by Lord Larys Strong, the Clubfoot, who had never left the capital.[6] That same night, King's Landing rose in a riot, with men and women of the common folk shouting for justice for the beloved Helaena and her dead sons.[1]