Alicent Hightower was a member of House Hightower who became the second wife to King Viserys I Targaryen. She was the daughter of Ser Otto Hightower, who had been Hand of the King to Jaehaerys I, Viserys I, and later his grandson Aegon II. She was the mother of King Aegon II, Queen Helaena, Prince Aemond and Prince Daeron.

Alicent was described as precocious at fifteen[4] and clever and lovely at the age of eighteen. After having given birth four times, Alicent remained as slender and graceful as before the first pregnancy.[5]

Alicent was born in 88 AC to Otto Hightower, the younger brother of Lord Hightower, the Lord of the Hightower. Alicent had several brothers, including Gwayne.[5]

When her father was named Hand of the King by King Jaehaerys I Targaryen in 101 AC, thirteen year-old[N 1] Alicent accompanied him to court together with her brothers and mother. Alicent eventually became the constant companion of King Jaehaerys, whose health was failing. She fetched his meals, helped him wash and dress, and read to him. In the end, King Jaehaerys sometimes mistook her for his daughter, Saera Targaryen. Jaehaerys eventually died in 103 AC, while Alicent was reading to him.[5]

Alicent stayed at court, as her father continued to occupy the position as Hand under Jaehaerys's grandson and successor, King Viserys I Targaryen. Already early in the reign of Viserys, Ser Otto and Prince Daemon Targaryen were at odds with each other, and the court fool Mushroom has suggested that the quarrel between the two men began when Daemon deflowered Alicent. The truths of these tales have never been uncovered.[5]

In the years that followed, Alicent caught the eye of King Viserys I Targaryen, whose first wife, Queen Aemma Arryn, had died, and whose small council was urging him to wed again. Ignoring all advice from his council, Viserys choose Alicent as his wife. They married in 106 AC, despite the whispers of people who believed that the Hand had risen above himself. Some doubted Alicent's virtue, as rumors began circling that she had given her maidenhead to Prince Daemon, and had later even slept with King Viserys while Queen Aemma was still alive. The notorious Mushroom suggested that Alicent had been more than an aide to the late Jaehaerys.[4] Nonetheless, Alicent was wed to Viserys. While this forestalled other potential marriage-alliances Viserys's small council would have preferred, it was not a totally unwise choice, as the Hightowers were still one of the leading families in Westeros, with close ties to the Faith of the Seven (whose leadership were still based in Oldtown at the time).[5]

Originally, Queen Alicent had a good relationship with her step-daughter, Princess Rhaenyra Targaryen. But when Alicent gave birth to a son, Prince Aegon, a daughter, Princess Helaena, and another son, Prince Aemond, in rapid succession, and Rhaenyra remained Viserys's heir, those feelings started to change. Both women wanted to be the first lady of the realm, but there could only be one.[5]

Alicent's biggest supporter was her own father, Ser Otto Hightower. He eventually pushed too far on the matter, and was stripped of his position as Hand. Having no place at court anymore, Otto returned to Oldtown. A "queen's party", a group of powerful lords who were friends with Queen Alicent, remained, who supported the rights of Alicent's sons.[5]

In 111 AC, a great tourney was held at King's Landing on the fifth anniversary of the king’s marriage to Queen Alicent. At the opening feast, Alicent wore a green gown, whilst Princess Rhaenyra dressed in Targaryen red and black. Note was taken, and thereafter it became the custom to refer to "greens" and "blacks" when talking of the queen's party and the party of the princess, respectively. In the tourney itself, the greens were defeated by the blacks, when Ser Criston Cole, wearing Rhaenyra's favor, unhorsed all of the queen's champions, including two of her cousins and her youngest brother, Ser Gwayne Hightower.[6]

Prince Daemon Targaryen was opposed to Alicent and her sons, and after his return to King's Landing, he made fun of Alicent, Aegon and Aemond, and the other greens, to entertain Princess Rhaenyra. It is said he acted cool towards the princes Aegon and Aemond, because they had pushed him even lower in the line of succession.[5]

When Rhaenyra turned sixteen, the small council started looking for a suitable husband. Alicent had her own choice: her eldest son, Prince Aegon, who, while the princess was sixteen years old, was only six years old himself. Viserys argued that the siblings had never gotten along, but Alicent urged her husband that was all the more reason to wed the two. Viserys refused, believing that Alicent only made the suggestion to get her own blood on the throne.[5]

By the time Princess Rhaenyra got married, in 114 AC, Queen Alicent had found a new member for her greens: Ser Criston Cole, former companion to Princess Rhaenyra. Criston fought in the tourney for Rhaenyra's wedding with Alicent's favor, and was named Alicent's personal sworn shield soon thereafter.[5]

By 115 AC, the enmity between the greens and the blacks had grown deep. Whilst Alicent had given birth to Prince Daeron, who, just like his brothers and sister, looked unmistakably like a Targaryen, Princess Rhaenyra had given birth to Princes Jacaerys and Lucerys, who both looked nothing like either Rhaenyra or her husband, Ser Laenor Velaryon. Whilst Alicent was convinced the children had actually been fathered by Ser Harwin Strong, King Viserys did not share these feelings.[5]

In 120 AC, Alicent's second son became involved in an incident where Rhaenyra's son Lucerys took out Aemond's right eye. Alicent, angered, demanded that to Lucerys the same would be done. After this incident, King Viserys declared that Alicent and her children would remain at court in King's Landing, whilst Rhaenyra and her family remained at Dragonstone. Later that year, as Rhaenyra gave birth to her first son by Prince Daemon, Alicent grew wroth upon learning the child had been named Aegon, believing it to be a slight against her own firstborn, who had also been named Aegon.[5]

Main article: Dance of the Dragons 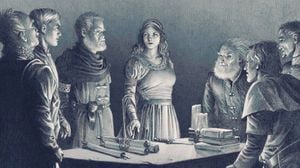 The Green council plotting just after the death of King Viserys by Douglas Wheatley in Fire & Blood.

When King Viserys I Targaryen died in his sleep in King's Landing, on the third day of the third moon in 129 AC, a servant warned Queen Alicent as instructed, without telling anyone else. According to Mushroom, who was away with Rhaenyra Targaryen on Dragonstone, Alicent poisoned Viserys's hippocras.[7] Regardless, Alicent warned Ser Criston Cole, now Lord Commander of the Kingsguard, and together, they called the small council, where plans were made to crown Alicent's son Prince Aegon, instead of Princess Rhaenyra, who had been Viserys's heir. At the coronation ceremony held for Aegon II and Helaena, Aegon's sister-wife, in the Dragonpit, Alicent placed her own crown upon the head of Helaena and addressed her as "my queen".[6]

After the coronation Alicent moved her chambers to the Tower of the Hand, where her father resided. Every evening before bed, Queen Helaena brought her children to see their grandmother. Because the Tower of the Hand was less secure than Maegor's Holdfast, Blood and Cheese were able to take advantage of this custom. They stole into Alicent's chambers, slew her bedmaid, and bound and gagged Alicent. When Helaena arrived with the children, they slew Prince Jaehaerys, Aegon's eldest son and heir, as revenge for the death of Rhaenyra's son Lucerys. Helaena subsequently went mad with grief.[6] Aegon gave his surviving son, Prince Maelor, to his mother Alicent to raise.[8]

Alicent unsuccessfully defended her father, Ser Otto Hightower, when Aegon II replaced him as Hand of the King with Ser Criston Cole.[9] Alicent barred the gates of King's Landing when thousands of smallfolk began fleeing the capital after the battle at Rook's Rest.

Alicent yielded the Red Keep to Rhaenyra during the fall of King's Landing, during which her brother, Ser Gwayne Hightower, was killed by Ser Luthor Largent.[9] Alicent was bound in golden fetters, but while her father, Ser Otto Hightower, and co-conspirators on the small council were beheaded for treason, Rhaenyra spared her life "for the sake of our father, who loved you once".[6]

According to Mushroom, Mysaria suggested to Rhaenyra that Alicent and Helaena be forced to prostitute themselves in one of King's Landing's brothels. Gyldayn discredits the story.[1] When Helaena's madness led her to commit suicide by jumping from her window, Alicent cursed her rival.[6] Prince Aemond died fighting Prince Daemon Targaryen in the Battle Above the Gods Eye,[1] and Prince Daeron died at the Second Battle of Tumbleton.[6] Alicent's grandson Maelor died at Bitterbridge.[10]

Rhaenyra fled the capital after the Storming of the Dragonpit, and Alicent was in attendance when Ser Perkin the Flea then placed his squire, Trystane Truefyre, on the Iron Throne.[11] Aegon II fed Rhaenyra to Sunfyre after the fall of Dragonstone.[6]

When Lord Borros Baratheon ended the Moon of the Three Kings, Alicent negotiated the betrothal of her surviving son, King Aegon the Elder, to Cassandra Baratheon. Alicent was overcome with joy to learn that her granddaughter, Princess Jaehaera Targaryen, had reached Storm's End in safety. Alicent did not trust the Sea Snake, Lord Corlys Velaryon, and she reluctantly agreed to betroth Jaehaera to Rhaenyra's son, Prince Aegon the Younger.[12]

As the armies of the Lads and Lord Cregan Stark advanced on the capital, conspirators plotted against Aegon II. The king was found poisoned and Alicent was arrested by Velaryons.[12]

Rhaenyra Targaryen's son took the throne as Aegon III Targaryen in 131 AC.[13] During the Hour of the Wolf, Lord Cregan Stark sentenced to death the men who had arrested Alicent.[14] The Dowager Queen opposed the marriage of Jaehaera to the new king and was absent from the ceremony. She once terrified her granddaughter by suggesting she slit Aegon's throat. Since Alicent refused to be reconciled, Ser Tyland Lannister, the Hand of the King, ordered her confined to Maegor's Holdfast.[3]

Alicent remained in her chambers for the last year of her life. Her only company was her septa, serving girls, and guards. Alicent often wept, began talking to herself, and came to dislike the color green. She died in 133 AC, during the outbreak of Winter Fever.[3]

Do keep trying, soon or late, you may get one who looks like you.[4]

I want to see my sons again, and Helaena, my sweet girl, oh ... and King Jaehaerys. I will read to him, as I did when I was little. He used to say I had a lovely voice.[3]

—the dying Alicent to her septa

The boy is Alicent's own blood. She wants him on the throne.[5]

—Viserys I Targaryen on Alicent's scheming

Alicent was the daughter of Ser Otto Hightower. She had an unknown number of brothers including Ser Gwayne Hightower. Alicent had four children and three grandchildren.