The greens, originally known as the queen's party, were the faction of House Targaryen and their loyalists who supported the ascent of Aegon II as King of the Seven Kingdoms during the Dance of the Dragons and the years that preceded it. They were opposed by the blacks.[1] 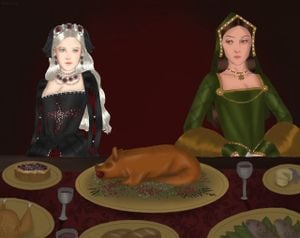 Rhaenyra in black and Alicent in green, by Fkaluis ©

Their name derives from a great tournament held in 111 AC at King's Landing on the fifth anniversary of the King Viserys I's marriage to Queen Alicent Hightower, his second wife. At the opening feast, Queen Alicent wore a green gown, whilst Princess Rhaenyra Targaryen, Viserys’s daughter by his first wife, dressed dramatically in Targaryen red and black. Note was taken, and thereafter their respective factions at the royal court imitated the fashions they set - the "queen's party" dressing in green, and the "princess's party" dressing in black. In time, it became the custom to refer each party as simply "the greens" and "the blacks".[2] 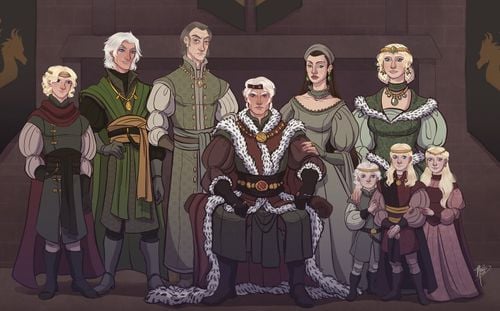 Note: Lord Corlys Velaryon and Lord Borros Baratheon were added to the green council after the Moon of the Three Kings.[3]

Defected to the greens

Men from the Reach