Year 130 After the Conquest (130 AC) is a year in the Westerosi calendar, the 130th after Aegon's crowning in Oldtown that maesters and educated people use as a reference to date the years.

Through entire 130 AC, the civil war known as the Dance of the Dragons continued. It was this year where Queen Rhaenyra Targaryen managed to conquer King's Landing, though she would hold it for half a year only, giving her the name "Half-Year Queen". In addition, Rhaenyra and her army did not manage to capture King Aegon II Targaryen, nor his heirs, as Aegon and his remaining children had been smuggled from the city. 130 AC ended with the deaths of both Queen Rhaenyra Targaryen and King Aegon's dragon Sunfyre, though Rhaenyra's death did not end the war. 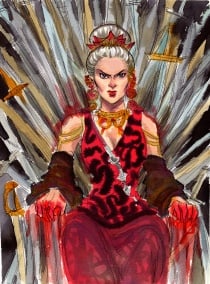 Rhaenyra at the Iron Throne, as depicted by Cecilia Latella