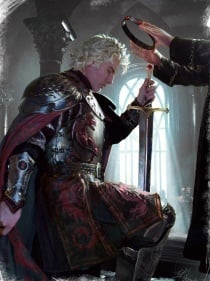 Aegon's I coronation at the Starry Sept, as depicted by Michael Komarck in The World of Ice & Fire.

Year 1 After the Conquest (1 AC) is the first year of the reign of King Aegon I Targaryen, starting on the day Aegon was crowned in Oldtown. Aegon's coronation at Oldtown is used by maesters to date the Westerosi calendar. The start of Aegon's reign was preceded by Aegon's Conquest, a war lasting two years.

In 1 AC the Three Sisters tried take advantage of the chaos caused by the Conquest and declared themselves independent. The secession was quickly stopped by Queen Visenya Targaryen, using her dragon and an army of northmen.[1]