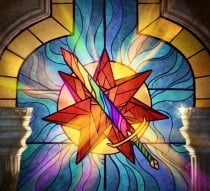 The rainbow sword of the Warrior's Sons and the star of the Poor Fellows, as depicted by Tim Durning © Fantasy Flight Games

Year 41 After the Conquest (41 AC) is a year in the Westerosi calendar, the 41st after Aegon's crowning in Oldtown that maesters and educated people use as a reference to date the years.

It was the first year of the Faith Militant uprising, sparked by the announcement by king Aenys of the marriage between his son Aegon and his daughter Rhaena. The Starry Sept condemned the incestuous union, and expelled Septon Murmison from the Faith for having performed the nuptials. Murmison was murdered by an angry mob , and by the end of the year much of the realm had risen against House Targaryen.