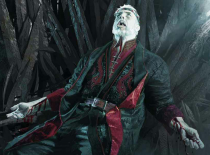 Year 48 After the Conquest (48 AC) is a year in the Westerosi calendar, the 48th after Aegon's crowning in Oldtown that maesters and educated people use as a reference to date the years.

In 48 AC Maegor the Cruel's reign crumbled down, with widespread revolts against him. House Tully openly defied him joining outlaw Ser Joffrey Doggett, Septon Moon marched towards Oldtown followed by thousands of followers and supported by lords Rowan and Oakheart, and his nephew Jaehaerys Targaryen was proclaimed king with the support of Storm's End. Most of his supporters abandoned him, including his Hand Lord Celtigar and his Great Maester Benifer. His master of ships, two of his kingsguard and his own wife Rhaena deserted him and went over to Jaehaerys. Lords Hightower, Lannister and Arryn also joined Jaehaerys cause. With only a few lesser lords left supporting him, Maegor nonetheless made his battle plans but was found dead on the Iron Throne the next morning.

Jaehaerys I spent the remaining of the year restoring the relationships between the crown and the Faith. After the convenient death of Septon Moon, the young king was crowned and anointed at Oldtown.