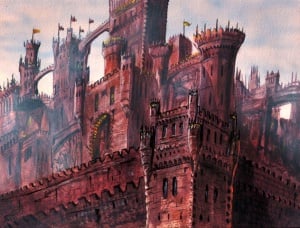 The Red Keep, as depicted by Franz Miklis

Year 45 After the Conquest (45 AC) is a year in the Westerosi calendar, the 45th after Aegon's crowning in Oldtown that maesters and educated people use as a reference to date the years.

In 45 AC the Red Keep was finally finished. After slaughtering its builders to prevent them to reveal its secrets, Maegor I commanded the ruins of the Sept of Remembrance to be cleared from the top of Rhaenys's Hill, to make space for the building of the Dragonpit. In the last part of the year, Maegor resumed his campaign against the Faith Militant.[1]