Syrax was a she-dragon. She was ridden solely by Rhaenyra Targaryen. Her name came from a goddess of Valyria.[1]

Syrax had yellow scales. She was huge and formidable, but not as fearsome or experienced in battle as Caraxes.[2] She was kept in chains and exceedingly well fed. She had not hunted for years at the time of the civil war.[3] 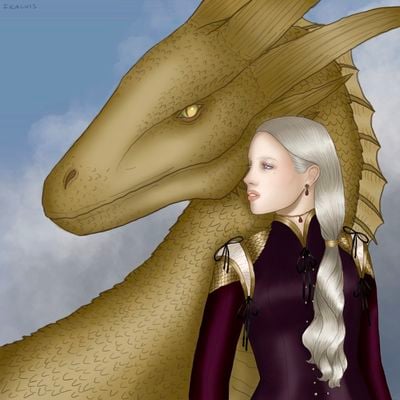 Rhaenyra Targaryen and Syrax by Fkaluis

Rhaenyra first took Syrax as a mount in 104 AC, when the princess was seven years old. Syrax was described as a "young" dragon at the time, and Rhaenyra herself named her "Syrax" (after a Valyrian goddess) - strongly implying that Syrax had no previous rider.[1]

Syrax laid "several" clutches of eggs during the reign of Viserys I. Her latest clutch was produced just prior to the civil war.[2] One of the eggs from that latest clutch was given to Rhaena, Rhaenyra's step-daughter. It is somewhat implied that the dragons of Rhaenyra's sons all hatched from eggs laid by Syrax, though the only definitive information about any dragon parentage is that Rhaena's dragon Morning eventually hatched from one of Syrax's eggs.[2][4]

Following her difficult stillbirth at the beginning of the war, Rhaenyra recovered enough strength to fly on Syrax, along with her other dragonriders, when they assaulted and captured King's Landing, with little opposition.[3]

In King's Landing Syrax was kept within the walls of the Red Keep in a stable in the outer ward that had been emptied of horses and given over for her use. Heavy chains bound her to the ground. The chains were long enough to allow her to move from the stable to yard but kept her from flying off riderless. The three other dragons belonging to the blacks were kept in the Dragonpit along with the greens's Dreamfyre.[3]

Syrax was slain in the aftermath of the Storming of the Dragonpit. Prince Joffrey had attempted to mount her to ride to the Dragonpit, save the other dragons, and perhaps mount his own dragon Tyraxes there. Dragons are not horses, however, and they will only accept one mount at a time. In mid-flight, Syrax shrugged off Joffrey, who fell to his death. Attracted by the bloodshed, Syrax continued on to the Dragonpit. Archmaester Glydayn noted that Syrax could have simply stayed high in the air and made runs at the mob with her flames, but instead she descended upon the ground, killing dozens with tooth and claw. There are numerous and contradicting accounts about specifically how Syrax died, and Gyldayn does not give them in detail. What is certain is that Syrax eventually died fighting the rioters.[5]

In The Dance of the Dragons, A True Telling by Maester Munkun writes that Vhagar roasted Ser Byron Swann when he tried to kill her by sneaking up behind his shield so the dragon would see only her reflection - as Serwyn of the Mirror Shield did to Urrax. However, according to Tyrion Lannister, Grand Maester Munkun errs, the dragon was in fact Syrax.[6]

Tyrion thinks it being Syrax makes much more sense than Munkun’s version, because this is the dragon mentioned in the letter to the daughter of Ser Byron Swann that was sent by his squire who saw the whole thing. Ser Byron was also the son of a marcher lord, and Storm's End was for Aegon. Vhagar was ridden by Prince Aemond, Aegon’s brother and fellow green.

Archmaester Gyldayn's history of the civil war sheds no further light on the matter as it gives no account of Ser Byron Swann's attempt to slay a dragon.