Catelyn and her party finally reach the Bloody Gate and safety. At her sister’s request, Catelyn makes the dangerous night ascent to the Eyrie to meet Lysa and her sickly son, Robert. 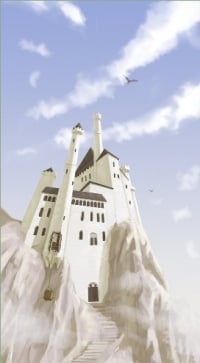 As they approach the Bloody Gate, Ser Donnel Waynwood tells Catelyn that she should have sent word before coming because the high road is no longer safe. Catelyn replies that they learned that to their sorrow, reflecting on the six men who died to bring her this far; three in the first attack, Lharys and Chiggen in the second, and Morrec of a festering wound. Only Ser Rodrik, Bronn, Marillion, Ser Willis Wode, Tyrion Lannister, and Catelyn herself remain. They had been sure they were all doomed when Waynwood’s men approached.

Ser Donnel goes on to explain that since Jon Arryn’s death the Vale mountain clans have grown bolder and Lady Lysa has forbade sending men out to fight them, though no one is sure why. Catelyn chooses not to mention that it is Lannisters her sister fears. Looking back at Tyrion, Catelyn notes the dwarf’s confidence in the presence of a large party of men sworn to House Arryn and wonders again if she is wrong to suspect him. She is also unsettled by the cunning of the man; although he remains her prisoner, the dwarf now rides freely, armed with a dirk and an axe and wearing the shadowskin cloak he won gambling with Marillion.

Catelyn asks Ser Donnel to send for Maester Colemon when they arrive to treat a badly injured Ser Rodrik. She is told that her sister has forbidden the maester to leave the Eyrie because of her concern for her son Robert’s health. All that Ser Donnel can promise is the attention of a septon who tends to the garrison. 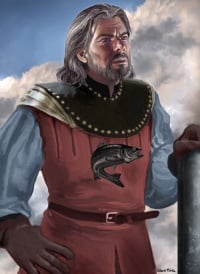 Brynden the Blackfish - by M.Luisa Giliberti ©

When they arrive at the Bloody Gate, they are met by Catelyn’s uncle, Ser Brynden Tully, known as the Blackfish. Once they have passed through the Gate, Catelyn can see the richness of the Vale of Arryn spread out before her and the peak known as the Giant's Lance rising miles above the valley floor. Her uncle points out the faint glimmer of the seven towers of the Eyrie on the side of the mountain and says that they can reach the foot of the Lance by evening.

When Ser Rodrik declares that he cannot go any farther, Catelyn decides to leave the rest of her party behind. Marillion the singer asks to accompany her to the castle. Catelyn, who cannot understand how Marillion survived the journey which killed so many others, agrees. Then Bronn, whose ferocious fighting helped cut their path to safety, declares that he is also coming. Catelyn dislikes the sellsword because of his lack of kindness and loyalty, and would prefer to separate the sellsword from his fast friend Tyrion Lannister. However, Catelyn cannot politely refuse after permitting Marillion to come and agrees.

As they travel, the Blackfish rides next to Catelyn. Catelyn recalls that her uncle was close to all the Tully children and even Petyr Baelish when they were children despite a long feud with their father, Lord Hoster. It had been in defiance of Lord Hoster naming him the black goat of the Tully flock that Ser Brynden had taken a black version of the Tully fish as his personal sigil. Catelyn recalls that the feud ended after the dual wedding of Catelyn and Lysa to Eddard Stark and Jon Arryn, when the Blackfish left Riverrun to serve Jon Arryn in the Vale.

After Catelyn finishes explaining her story, her uncle says her father must be warned, since Riverrun is right in the path of any Lannister attack. When Catelyn asks what the mood of the Vale is, he tells her that there is anger at the suspicious death of the much-loved Lord Jon and the giving of the title of Warden of the East to Jaime Lannister. Lysa has instructed everyone to call young Robert Arryn the “True Warden of the East.”

The Blackfish also gives Catelyn the dire news that the young Lord Robert is unhealthy and cries when his dolls are taken away, leading some to whisper that he is too weak for the seat. Some even suggest that Nestor Royce, who ruled as High Steward while Jon Arryn was serving as Hand of the King, should rule until Robert comes of age. Others believe that Lysa should remarry, but the Blackfish thinks she is just playing at courtship and intends to rule herself.

When Catelyn states that a woman can rule as wisely as a man, the Blackfish replies that the right woman can, but not Lysa. He explains that the death of her husband and the stillborn and miscarried children before that have left Lysa unstable and hysterically protective of her only child. Above all, Lysa seems to fear the Lannisters and now Catelyn has brought a Lannister to her doorstep. Catelyn insists that Tyrion is her prisoner. In reply, her uncle notes that Tyrion is not only not in chains but also carrying weapons with a sellsword trailing him like a shadow. Catelyn reminds him that Tyrion is not here by choice and that it was Lysa’s letter that started the whole business.

After passing through a valley surrounded by the high mountains, they reach the Gates of the Moon. Well above the gatehouse, Catelyn can see the looming mass of the mountain and high above the tower keeps of Stone, Snow, Sky, and then the Eyrie. Tyrion jests that if they plan to make him climb the mountain at night they might as well just kill him now. He is told that they will rest until morning. 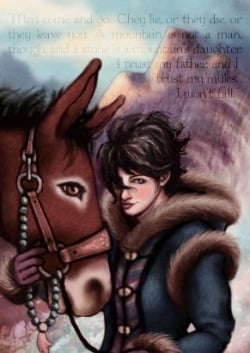 When the dwarf asks how one gets up, he is told there are steps leading up the mountain and trained mules that go as far as the way-castle called Sky. Beyond that the ascent is made on foot or in the winch baskets that bring up supplies—the Eyrie is directly above Sky. Tyrion declines the offer of being sent up in a basket because his father would not approve of him going up like a load of turnips if the others ascend on foot, claiming that Lannisters have a certain pride. Catelyn responds that Lannisters have arrogance, avarice, and lust for power. Tyrion replies that his father is the soul of avarice, Jaime has pride, and Cersei lusts for power, but he is innocent as a lamb and will bleat for her.

The portcullis is raised and they are met by Lord Nestor Royce. Brynden asks for hospitality for the night, and is told that Catelyn has been instructed to go up tonight, but the rest can have the hospitality of the castle. Brynden is furious, considering night ascent to be too dangerous without a full moon. The guide Mya Stone then introduces herself and promises that no harm will come to Catelyn, citing her experience on a hundred night ascents. Stone is the surname of bastards in the Vale and that reminds Catelyn of Jon. She is speechless, but Lord Nestor states that Mya has never failed him, and so Catelyn agrees to the night ascent.

Mya Stone guides Catelyn up the long path to the Eyrie in the dark, claiming that torches only blind one on a clear night. Mya then tells Catelyn that Mychel Redfort, a squire she loves, says she has the eyes of an owl. Catelyn knows that, because his family is highborn, the squire will never be allowed to marry a bastard.

At each way-tower they switch to fresh mules. The trip to the first way-tower does not seem too bad, but the next part is much steeper. At the next way-tower Mya explains that it is called Snow because, hundreds of years ago, this was where the snow began. At first Catelyn thinks that, as a Tully and a Stark, there is little in the world to scare her. However, when they must lead the mules across a high saddle between to spires of rock, Catelyn finds that she is too scared to move. Mya comes back and escorts her, blind and trembling, step by step across. At Sky, Mya explains that they must walk the last hour because the trail is more like a stone ladder. Catelyn states that, having travelled all day and the best part of a night, she will ride with the turnips instead. 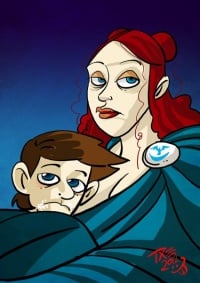 Lysa Arryn and her son Robert – by The Mico ©

Catelyn finds the Eyrie, which can house 500 men, strangely empty. She is brought to her sister’s quarters. Lysa, now a plump, pale, and (to Catelyn’s annoyance) well-rested woman, is polite until Ser Vardis Egen and Maester Colemon depart. Then she rages at Catelyn for bringing Tyrion to the Eyrie, and thus dragging her into Catelyn’s quarrel with the Lannisters. Catelyn replies that it was Lysa who sent her the letter naming the Lannisters as the murderers of her husband. Lysa responds that it was a warning to avoid them, not fight them.

Roused by his mother’s voice, young Lord Robert appears in the door, grasping a doll. Lysa introduces Catelyn to Robert and calls him a beautiful and strong child, warning Catelyn not to believe the stories. Lysa insists that on his deathbed her husband said “the seed is strong” to let everyone know what a strong boy his son was. Catelyn attempts to bring back the subject of preparing for war, but Lysa insists that Catelyn be quiet because such talk will scare Robert. Lysa then exposes her breast and the six-year-old grabs for it and starts to suck.

The sight makes Catelyn think of her youngest son Rickon, who is half this boy’s age and five times as fierce. Catelyn continues to press Lysa to discuss preparations for war. Lysa replies that even if the Lannisters could bring an army up, everyone says the Eyrie is impregnable. Catelyn realizes that her Uncle Brynden had tried to warn her about Lysa. Lysa then asks what she is supposed to do with Tyrion and Robert asks if he is a bad man. When Lysa replies that he is, Robert says, “Make him fly.” Lysa strokes the boy’s hair and muses that perhaps that is just what they will do.