A Clash of Kings-Chapter 41 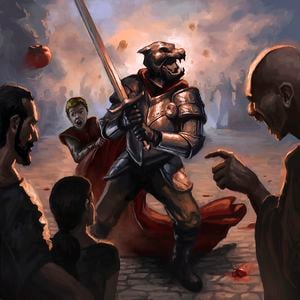 Tyrion, the royal family, and their retainers are at the docks to see Princess Myrcella off to Dorne. Tyrion is sending Arys Oakheart with her as her sworn shield. Prince Doran Martell has promised to move his banners into the high passes once Myrcella is safely at Sunspear.

Tyrion knows one of Cersei’s secrets, how she is consorting with the unsavory hedge knight Osmund Kettleblack and his brothers in order to raise her own force of sellswords. What the Queen doesn’t know is that Bronn is matching every copper she gives the Kettleblacks, thus Ser Osmund is really one of Tyrion’s men. On the ride back to Maegor's Holdfast, things get out of hand when someone in the crowd hits Joffrey in the face with dung, and the king sends the Hound to deal with the perpetrator. The crowd, frenzied due to the lack of food and the harsh living conditions, boils over and begins to trample the procession. Sensing what is about to happen, Tyrion screams for them to ride hard for the gates of the holdfast. In the mad rush, several members are lost, and by the time Tyrion reaches the safety of the gates, their lives are in doubt.

As Joffrey is ranting about traitors and how they attacked him, Tyrion dismounts and slaps him so hard his crown flies off, and then shoves him to the ground, shouting, "You set your dog on them! What did you imagine they would do?" Tyrion commands Ser Boros and Ser Meryn to return and find Sansa and those missing, and when the two Kingsguard balk, Cersei begins to berate them as well for their cowardice. Sansa returns, saved by Sandor Clegane who is covered in blood. Meanwhile, a fire has broken out in the city, and Tyrion can see the fear in the Hound's eyes when he commands the men to go and put out the fire.

Later, it is discovered that Preston Greenfield, Aron Santagar, and the High Septon lost their lives; Lady Tanda’s daughter Lollys is found alive, having been raped by fifty men outside a tanner’s shop, and Tyrion’s cousin Tyrek is missing. Tyrion wants his cousin found, mostly because the boy’s father Tygett was always kind to Tyrion. He is dismayed to learn from Jacelyn Bywater that many of the City Watch and the common folk consider Tyrion the problem in the city, and would revolt given the chance. Later, Bronn remarks, while Varys is in the room, that things would be a lot easier if Tommen were king. Tyrion understands this as a hint that Bronn thinks Joffrey should be killed.