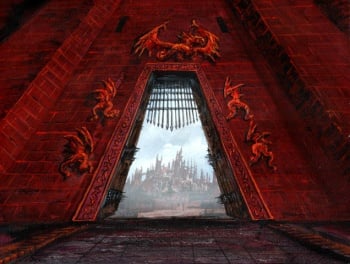 The Dragon Gate is one of the seven gates that surround the huge walls of King's Landing. It is located at the northern corner of the city's wall near Rhaenys's Hill.

In the reign of Maegor I Targaryen, Maegor had his own wife and queen, Alys Harroway, tortured to death and executed. Following her death, Alys's body was cut into seven parts and mounted on spikes above each of the seven gates of the city, one of which was above the Dragon Gate.[1][2]

During the Dance of the Dragons, a massive riot broke out in the city. The captains of the Old Gate and Dragon Gate, Ser Balon Byrch and Ser Garth the Harelip, managed to sally out and restore some semblance of order to the streets north and east of Rhaenys's Hill. Queen Rhaenyra Targaryen and her escort fled King's Landing through the Dragon Gate.[3]

During the regency of Aegon III, the Hand of the King, Tyland Lannister ordered the city gates to be strengthened so they could better resist attacks from within the city walls.[4]

The captain of the Dragon Gate, Humfrey Waters, is named the new commander of the City Watch of King's Landing.[5]