For hands of gold are always cold, but a woman's hands are warm 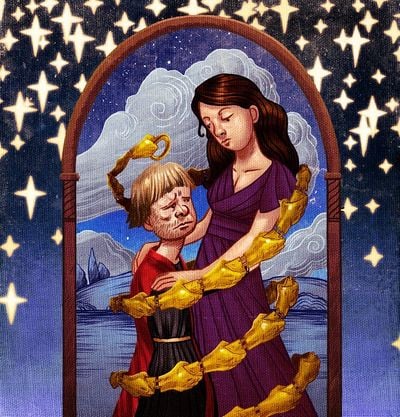 "Hands of Gold": Tyrion Lannister and Shae, enwrapped in the Hand of the King's golden chain of office.
By Tim Durning © Fantasy Flight Games

For hands of gold are always cold, but a woman's hands are warm is the refrain of a new song written by Symon Silver Tongue to blackmail Tyrion Lannister. Its proper title is not given by Symon.

He rode through the streets of the city,
down from his hill on high,
O'er the wynds and the steps and the cobbles,
he rode to a woman's sigh.
For she was his secret treasure,
she was his shame and his bliss.
And a chain and a keep are nothing,
compared to a woman's kiss.

For hands of gold are always cold, but a woman's hands are warm...[1]

Tyrion Lannister has his secret lover, the prostitute Shae, kept in a manse near the Iron Gate of King's Landing.[2] Shae has Symon Silver Tongue sing to her on nights when Tyrion does not visit. When Symon recognizes Tyrion, the Hand of the King, during one visit, Tyrion swears the musician to secrecy.[3]

After the Battle of the Blackwater, Tyrion advises Symon to leave for the Free Cities. Symon responds by playing his new song—which is about Tyrion and Shae—and threatening to sing it for Tyrion's elder sister, Queen Regent Cersei Lannister, or his father, Lord Tywin Lannister, the new Hand of the King. Symon tries to blackmail Tyrion: if he will not arrange his invitation to the to the tournament of singers that will be held at the wedding feast of King Joffrey Baratheon and Margaery Tyrell, Symon will sing his new song in the winesinks of the city. Tyrion cannot let this information reach Tywin, who has promised to hang any whores that he finds in Tyrion's bed. Tyrion has his sellsword, Bronn, murder Symon.[1]

When Tyrion is imprisoned for Joffrey's murder, after Shae gives evidence against him, he drunkenly sings Symon's song. He wishes he had learned all the words before having Symon killed, and considers writing more verses himself.[4]

Although condemned to death, Tyrion escapes the black cells with the aid of Ser Jaime Lannister and Lord Varys. After finding Shae in Tywin's bed within the Tower of the Hand, Tyrion quotes the song's refrain while he strangles her with the Hand's chain of golden hands.[5]

In Essos, while traveling with Illyrio Mopatis, Tyrion becomes inebriated and sings Symon's song, and he remembers how he had murdered Shae.[6]

While traveling on the Selaesori Qhoran, Tyrion tells Penny that he had a singer cooked in a stew for writing a song about him, and recalls the lyrics.[7] Later, Tyrion remembers how he had killed Shae, and recalls the words of the song again.[8]

Tyrion: That's not a song I would care to hear again. Ever.
Symon: No? A pity. Still, each man has his song, as my old master used to say when he was teaching me to play.[1]