Stone men are people inflicted by greyscale dwelling in the area known as the Sorrows.

Stone men are people in the late stages of greyscale who congregate on the Bridge of Dream in the Sorrows. The disease has caused them to become witless and lumbering, generally passive if left undisturbed, though further onset of the disease leads to madness and increased risk of provocation.[1] Physical contact with stone men bears a high risk of contracting greyscale, so they are treated with great caution.[1] They are rumoured to have a leader, the Shrouded Lord.[2] Thrice each year the triarchs of Volantis send a galley upriver with provisions, but they often deliver more afflicted than they do food.[2] 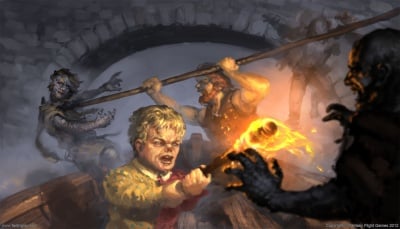 Three stone men jumped onto the Shy Maid and attacked the crew. © FFG

The pole-boat again goes to pass under the bridge. This time three stone men jump and land on the boat. The first one lands on the cabin roof and roars a word down at them that Tyrion Lannister does not know. The second stone man lands on the back, beside the tiller, Duck manages to knock him into the water. As the Shy Maid passes underneath Griff drives the stone man that landed on the cabin roof backward and the crew force the creature into the black waters of the Rhoyne.

The third stone man with a broken leg is behind Tyrion reaching for Young Griff. Tyrion knocks down Young Griff, leaps over him and thrusts his torch in the stone man's face. The creature rips the torch from Tyrion and throws it in the waters. Tyrion sees that he had once been a Summer Islander. Tyrion drives his shoulder into him and the stone man grabs onto Tyrion. They both fall into the Mother Rhoyne. Griff manages to pull Tyrion out saving his life.

Hatred does not stir the stone men half so much as hunger.[2]

There will be stone men on the span. Some may start to wail at our approach, but they are not like to molest us. Most stone men are feeble creatures, clumsy, lumbering, witless. Near the end they all go mad, but that is when they are most dangerous. If need be, fend them off with the torches. On no account let them touch you.[2]