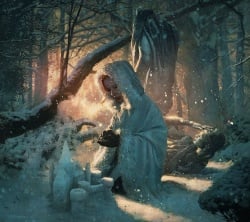 At the Eyrie, Sansa awakens to find it snowing outside. She wanders outside and begins to sculpt a snow castle, slowly forming it into a replica of Winterfell. Littlefinger finds her in the garden and helps her finish the castle. He tells her she is even more beautiful than her mother was at her age, and then proceeds to kiss her. Sansa is shocked by Lord Baelish’s action, but for half a heartbeat she yields. She tries to make him stop and then young Robert approaches interrupting them. Robert begins to destroy the snow castle with his ragged doll. Sansa reacts by grabbing the doll which causes it to tear in half. This in turn causes her cousin to begin shaking violently. Maester Colemon is called to bring the boy for a leeching, in an attempt to cure the fit.

Sansa is brought before her aunt, but Lysa is not concerned about her son’s seizure, but rather Sansa kissing Petyr. Lysa accuses her of trying to seduce her husband, just like her mother had tried to "steal" Petyr from her. Lady Arryn then relates the story of how one night when they had all gotten drunk, Catelyn spurned Littlefinger, and Lysa had gone to his bed afterward to comfort him, even though he had called her Cat. Lysa continues to rant about how her father took their baby away from them, and then grabs Sansa and drags her before the Moon Door while calling for Marillion. Lysa pushes her closer and closer to the edge, until Littlefinger arrives and tells his new wife to release her.

Lysa, bordering on insanity, reveals how she had persuaded Jon Arryn to get Littlefinger his first post, and how she had done as he said when Petyr told her to put the Tears of Lys in her husband’s wine. He also had her write the letter to her sister falsely naming the Lannisters as Jon Arryn’s murderers. Petyr promises never to leave her side again, and as she falls into his arms, he tells her he has only ever loved one woman... Cat. He then shoves her out the Moon Door. He calls for the guards, accusing Marillion of killing his wife…