Donal Noye is an armorer, smith, and steward of the Night's Watch.[2] He used to be a smith for House Baratheon of Storm's End.

Donal has a big belly and a pinned-up sleeve. His jaws bristle with black stubble.[3][4] He is muscular and strong, even with one hand missing. His nose is broad and flat.[5]

Before he joined the Night's Watch, Donal was a Baratheon man. He had worked as a smith at Storm's End and made the warhammer for Robert Baratheon which killed Prince Rhaegar Targaryen at the Trident,[5] as well as the first sword for Stannis Baratheon.[6]

Donal left the service of House Baratheon after Robert's Rebellion, having lost an arm during the siege of Storm's End.[5] Jon Snow thinks Donal has traveled the Seven Kingdoms and participated in many battles.[5]

When Donal sees Jon Snow easily beating his fellow Night's Watch recruits in training, He lectures Jon that the youth does not fight fair. Jon has experience from capable trainers, such as Ser Rodrik Cassel, while the other recruits have little, if any practice. Furthermore, Jon humiliates them by showing how easily he can beat them, making the recruits fear and despise him.[5] Jon is initially angered by what Donal says, but he befriends the other recruits and begins training them. He also becomes on friendly terms with the smith. Jon begins to help Donal in the armory.[7]

After Lord Commander Jeor Mormont is attacked by wights, he brings the burned longsword Longclaw to Donal's armory for repairs.[8]

Donal wishes his friend Jon well when the youth joins the great ranging beyond the Wall.[3] 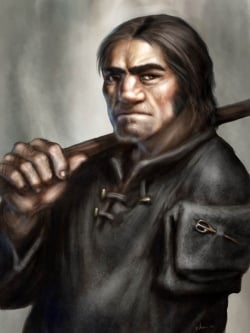 Donal is one of the few people to remain at Castle Black. When Jon escapes Styr's wildlings and runs to Castle Black to warn of the coming assault, Donal is concerned that Jon had deserted. However, he ends up trusting the boy and brings him to Maester Aemon for treatment of his wounds and to begin preparing for the defense of the Wall. Despite having only one arm, Donal carries Jon without difficulty up the stairs and holds Jon down when Aemon cuts out the arrow piercing him.[4]

The remaining men of the Night's Watch at Castle Black retreat to the King's Tower, because the other buildings are not defensible. Donal, taking command, sends warning to Mole's Town and offers the villagers refuge in the King's Tower if they help defend it.[9]

During the attack on Castle Black, the attacking Thenns manage to claim the stairs despite severe losses and the remaining men of the Night's Watch flee to the Wall. Donal, having prepared for this by drenching the last landings with oil, has burning arrows fired, and the attacking Thenns perish to a man.[9]

Donal then leads the defense against Mance Rayder's vast army north of the Wall. The wildlings have no ladders to climb the Wall, so they attack the gate. When Mag Mar Tun Doh Weg begins to break it, Donal gives command of the Wall to Jon and leaves with a few men to save the gate. Donal succeeds in stopping the wildlings at the gate, at the cost of his life and those of the men with him.[10] Jon later finds that Mag crushed Donal's spine and that Donal impaled his sword in the giant's throat.

When the Night's Watch is on the brink of defeat, Stannis Baratheon appears with his army and defeats the wildlings. According to Stannis, if the wildlings had already taken the Wall this may not have been possible.[6]

Because Stannis is residing in the King's Tower, Jon Snow, now Lord Commander of the Night's Watch, moves into Donal's modest room with a narrow bed behind Castle Black's armory. The smith's possessions include a silver drinking cup, six pennies and a copper star, a niello brooch with a broken clasp, and a musty brocade doublet with the stag of House Baratheon.[11] Jon later thinks that the Night's Watch needs leaders with the compassion of Donal Noye.[12]

Robert was the true steel. Stannis is pure iron, black and hard and strong, yes, but brittle, the way iron gets. He'll break before he bends. And Renly, that one, he's copper, bright and shiny, pretty to look at but not worth all that much at the end of the day.[3]

The Watch is not what it was. Too few honest men to keep the rogues in line.[4]

Donal: Jon, you have the Wall till I return.

The armorer could talk about life. He'd had one. He'd only taken the black after he'd lost an arm at the siege of Storm's End. Before that he'd smithed for Stannis Baratheon, the king's brother. He'd seen the Seven Kingdoms from one end to the other; he'd feasted and wenched and fought in a hundred battles. They said it was Donal Noye who'd forged King Robert's warhammer, the one that crushed the life from Rhaegar Targaryen on the Trident. He'd done all the things that Jon would never do, and then when he was old, well past thirty, he'd taken a glancing blow from an axe and the wound had festered until the whole arm had to come off. Only then, crippled, had Donal Noye come to the Wall, when his life was all but over.[5]

Tormund: Some great lord was he, this Donal Noye? One of your shiny knights in their steel smallclothes?


Jon: A blacksmith. He only had one arm.


Tormund: A one-armed smith slew Mag the Mighty? Har! That must o' been a fight to see. Mance will make a song of it, see if he don't ... To Donal Noye, and Mag the Mighty.[14]
—Tormund and Jon Snow

His treasures were his tools, and the swords and knives he made. His life was at the forge.[11]

Noye made my first sword for me, and Robert's warhammer as well. Had the god seen fit to spare him, he would have made a better Lord Commander for your order than any of these fools who are squabbling over it now.[6]