This article contains a summary of an article that features on the main page. The text of the article is static; it is a copied part of the complete article. Currently (August 18, 2017) we have 55 feature articles (see the template page. The code below the lines calls this template in way that it shows every day a different article from the collection of feature articles. To add an article there should first be consensus about it. After that create a summary for it on a separate article with the name Feature article/<number of article>. Then change the number right after the word "mod". This should be the number of feature articles we have. 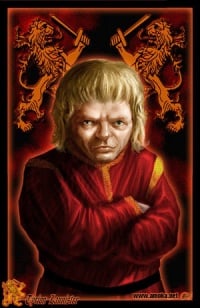 Tyrion Lannister is the third and youngest child of Lord Tywin Lannister of Casterly Rock and his wife, Lady Joanna. Tyrion is an ugly and misshapen dwarf, and because of this he is sometimes mockingly called Imp and Halfman. Despite his deformation and the social stigma that comes with it, Tyrion's wit and intelligence prove to be great assets to the Lannister cause. However, his mother died giving birth to him, and his father has never forgiven him for it. As a result, Tyrion's relationship with his father is a difficult one. His sister, Queen Cersei, resents him as well, in part because of their mother's death, and in part (unbeknownst to Tyrion) due to a prophecy made in her youth. Tyrion has a better relationship with his brother Jaime, despite their differences.

During the early part of War of the Five Kings Tyrion rises high, acting as Hand of the King to Joffrey I Baratheon, but he reaches his zenith at the Battle of the Blackwater, where he suffers a nearly-mortal wound that leaves him disfigured and pushed out of power.

Tyrion is one of the most distinctive and predominant POV characters in the series, often cited by George R. R. Martin as his favorite character. Read more...