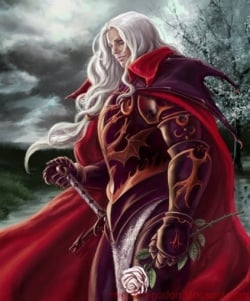 Rhaegar Targaryen, the Prince of Dragonstone, was the eldest son of King Aerys II Targaryen and his sister-wife, Queen Rhaella. Born in 259 AC, on the same day and location of the tragedy of Summerhall, Rhaegar was always melancholic. Though he was skilled in fighting and known to read obsessively, especially as a child, Rhaegar favored playing his harp. Despite his private manner, Rhaegar was well loved by the smallfolk of Westeros.

Because Rhaegar had no sister when he reached the age of marriage, King Aerys arranged his wedding to the Dornish princess Elia Martell, a distant relative of House Targaryen. Rhaegar and Elia had two children during their marriage, Princess Rhaenys and Prince Aegon.

In 281 AC, the year of the false spring, Rhaegar caused a scandal at the tourney at Harrenhal where, as the victor, he was allowed to chose the new queen of love and beauty. Instead of crowning Elia of Dorne, Rhaegar rode past his wife and crowned Lady Lyanna Stark, who was betrothed to Lord Robert Baratheon.

Tragedy struck Rhaegar's house again about a year later, when shortly after the birth of his heir, Prince Aegon, the crown prince left for the riverlands. Lyanna disappeared not too long thereafter, and it was said that Prince Rhaegar had abducted her. Angered by the news, Lyanna's brother Brandon went to King's Landing, where he threatened Rhaegar's life. Though Rhaegar was not present, King Aerys II ordered Brandon's arrest, and had Brandon and his father Rickard killed, before demanding the heads of Lyanna's second brother, Eddard Stark, and betrothed, Robert Baratheon. This sparked Robert's Rebellion.

Though Rhaegar was missing for most of the war, he returned from the south to fight in the Battle of the Trident. He died there when Robert defeated him in single combat. Read more...