Princess Elia Nymeros Martell, also known simply as Elia Martell[5][6][7][8][9] or Elia of Dorne[6][4][1][10] was a Dornish princess from House Martell. She was married to the crown prince, Rhaegar Targaryen, and by him birthed Rhaenys and Aegon. Elia was raped and murdered by Ser Gregor Clegane in the Sack of King's Landing during Robert's Rebellion.

Elia Martell was said to be beautiful,[11] slender,[3] with black eyes, and a flat chest.[12] She always had a delicate health,[3][6] having been born a month premature,[13] which did not permit her much travel in her youth.[6] According to Barristan Selmy, Elia was a gentle, good, and gracious lady, but he also describes her as frail, due to her delicate health.[14][15] He also says she was kind and clever, with a sweet wit.[16]

Elia Martell was the fourth child and first daughter born to the future Princess of Dorne, and the second child to live past infancy. She was born a month premature, and her older brother Doran did not expect her to live, when he learned about her birth; she survived, however, though her health was always fragile thereafter.[13] During her youth she was very close to her younger brother, Oberyn,[17] to whom she was only one year apart.[13]

When Elia reached the age of marriage, she and her brother Oberyn, together with their mother and their mother's consort, traveled from Dorne to several potential suitors for both Elia and Oberyn. Amongst the places they visited were Starfall, the Arbor, Oldtown, the Shield Islands, Crakehall, and finally Casterly Rock. Oberyn mocked all Elia's suitors. In Oldtown, Elia met Baelor Hightower, whom she liked most of all her suitors. She had been half in love with him, until he farted in the presence of both her and Oberyn, leading to Oberyn naming him "Baelor Breakwind". Elia could not look at him without laughing afterwards.[6]

Elia's mother had known Lady Joanna Lannister from the time they both served as ladies in waiting to Queen Rhaella Targaryen. Despite having learned of Joanna's death in childbirth, in 273 AC, during their stay at Oldtown, the Martells traveled onwards to Casterly Rock. Oberyn believes that his mother had planned with Joanna to marry either Elia or Oberyn to one of Joanna's twins, Jaime and Cersei, since there had been an empty cabin on their ship, meant for someone of high birth. Waiting until it was decent, Elia's mother eventually broached the subject of marriage to Lord Tywin Lannister, first suggesting a match between Cersei and Oberyn, next a match between Elia and Jaime. Tywin refused both matches brusquely, informing her how Cersei was meant to marry Prince Rhaegar Targaryen, and suggesting the new-born Tyrion Lannister as betrothed to Elia instead, which was taken as an insult.[6][17][18] 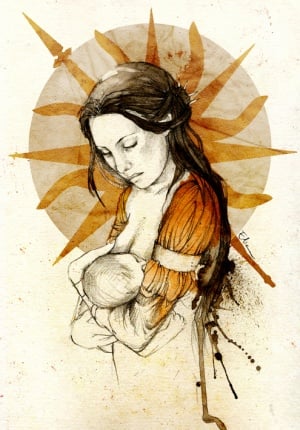 Elia and Prince Rhaegar Targaryen were betrothed in early 279 AC, and they married a year later, in 280 AC, in a great ceremony at the Great Sept of Baelor in King's Landing.[7] They moved to Dragonstone shortly after their wedding, where later in 280 AC, Rhaegar and Elia's first child was born, Princess Rhaenys. When the baby was presented to Rhaegar's parents at court, Queen Rhaella embraced her granddaughter warmly, but King Aerys II refused to touch or hold the child and complained that she "smells Dornish". Rhaegar and Elia's second child, Prince Aegon, was born near the new year of 282 AC.[7][19]

Their marriage—though not romantic—seemed happy, although Elia's health, which had always been problematic, remained fragile.[14] Elia was bedridden for half a year after giving birth to Rhaenys, and giving birth to Aegon nearly killed her. Following Aegon's birth, the maesters told Rhaegar that Elia would bear no more children.[20]

Elia attended the tourney at Harrenhal in 281 AC, during the year of the false spring, together with her husband, Prince Rhaegar, and her father-in-law, King Aerys II Targaryen. Rhaegar won the tournament, and was to crown the queen of love and beauty. However, he passed over Elia, and crowned Lady Lyanna Stark of Winterfell instead.[14]

At the start of the next year, Rhaegar left Elia and their newborn son Aegon on Dragonstone, and took to the road with several companions. Not long thereafter, Rhaegar disappeared with Lyanna,[19] and this event was one of the events which sparked Robert's Rebellion. According to Rhaegar's younger brother, Prince Viserys, Rhaegar was simply not happy with his marriage. He believes that, if Rhaegar had been happy with Elia, he would not have needed Lyanna.[14] George R.R. Martin has described Elia's relationship to Rhaegar as "complex".[21] Doran Martell, the Prince of Dorne, had been furious at his younger sister's mistreatment, and thus was slow to lend aid to House Targaryen during Robert's Rebellion. Preparing to battle the rebels, King Aerys II Targaryen threatened Elia's uncle, Prince Lewyn Martell of the Kingsguard, gracelessly reminding him that he held Elia and her young children. Lewyn took control of the ten thousand Dornishmen who had eventually been sent to aid the Targaryens, and accompanied Elia's husband, Prince Rhaegar Targaryen, to fight in the Battle of the Trident. Lewyn and Rhaegar both died at the Trident, and Aerys, due to his paranoia, believed that Lewyn must have betrayed Rhaegar during the battle. As a consequence, he kept Elia and both of her children in King's Landing as hostages against possible Dornish betrayal.[22][23]

For most of the rebellion, House Lannister had remained neutral, but after the Battle of the Trident, Lord Tywin Lannister and twelve thousand of his westermen approached the capital. King Aerys opened the gates to them, mistaking them for allied reinforcements. Instead they began the Sack of King's Landing in the name of King Robert.[24] Ser Jaime Lannister later recollected that as he himself was murdering Aerys to prevent the wildfire plot, Ser Gregor Clegane and Ser Amory Lorch were scaling the walls of Maegor's Holdfast, while Lord Eddard Stark was leading his own forces through the city gates.[10] Elia's daughter, Princess Rhaenys, was killed by Amory after breaking the door down; he dragged the screaming toddler from under her father's bed and stabbed her over fifty times.[25] Gregor murdered Elia's son, Prince Aegon, in front of her by smashing his head against a wall. He then raped her, and killed her by crushing her head.[6][4]

Although Ser Gregor Clegane's involvement is common knowledge at Casterly Rock,[26] the official histories (written by the victors) record it is not known who murdered Princess Rhaenys in her bed, or who smashed the infant Prince Aegon's head against a wall and killed Elia. Some rumors say King Aerys II Targaryen had commanded it when he learned that Lord Tywin Lannister had taken up Lord Robert Baratheon's cause, while others suggest that Elia did it herself for fear of what would happen to her children in the hands of her dead husband's enemies.[27]

According to Tywin, he thought the deaths of Elia's children had been necessary to prove the loyalty of House Lannister to the rebel cause after his previous neutrality, so he directly ordered them killed. Tywin claims, however, that he had never ordered the rape, and that Elia, by herself, had been nothing, stating that her death had been unnecessary. He claims that he most likely had neglected to mention Elia when giving orders to Gregor, who killed her because he had not explicitly been told by Tywin to spare her.[25] Elia's younger brother, Prince Oberyn Martell, however, believes that Tywin had Elia and her children killed as revenge for the slight he suffered when Aerys II refused the marriage of his son and heir, Prince Rhaegar Targaryen, to his daughter, Cersei Lannister. Aerys married Elia, whom Tywin had refused for his own heir, to Rhaegar instead.[6]

House Martell was enraged by the murder of Elia and her children. Oberyn wanted to continue the war and champion the cause of Prince Viserys Targaryen, the only surviving son of Aerys II. Secret messages were sent, but the new Hand of the King, Lord Jon Arryn, traveled to Sunspear, where he returned the body of Prince Lewyn Martell, and spoke with Doran Martell, the Prince of Dorne, ending all talks of war.[25] 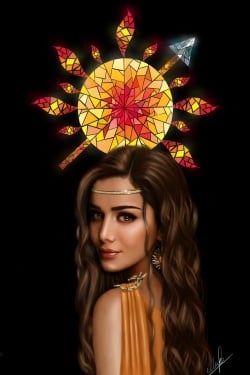 In the black cells of the Red Keep, Lord Varys tells Lord Eddard Stark that House Martell still broods on the murder of Princess Elia and her babes, Princess Rhaenys and Prince Aegon Targaryen.[5]

Ulmer, a ranger and formerly a member of the outlaw Kingswood Brotherhood, claims he once put an arrow through the hand of Ser Gerold Hightower of the Kingsguard in order to steal a kiss from a Dornish princess. Ulmer says he stole the princess's jewels and a chest of coins.[28]

Ser Jaime Lannister has a nightmare involving Elia's husband, Rhaegar Targaryen. The prince stands between Jaime's deceased sworn brothers of the Kingsguard and tells Jaime, "I left my wife and children in your hands." Jaime replies that he never thought his father, Lord Tywin Lannister, would hurt them.[29]

Prince Oberyn Martell arrives in King's Landing, asking for justice for Elia and her children.[17][25] When Tyrion Lannister stands on trial for the murder of King Joffrey I Baratheon and learns his adversary in a trial by battle will be Ser Gregor Clegane, Oberyn sees an opportunity for vengeance for Elia and champions Tyrion.[30] Oberyn extracts a confession from Gregor after mortally wounding him, but the Mountain takes advantage of Oberyn letting his guard down, and kills the Red Viper.[6]

It is revealed that Doran Martell, Prince of Dorne, has been plotting secretly to restore the Targaryens and revenge himself on Tywin, whom he and his brother, Oberyn, held responsible for the murders of Elia and her children.[31]

Ser Barristan Selmy tells Queen Daenerys Targaryen that her brother, Prince Rhaegar, has been fond of Elia.[16] Jon Connington believes that Elia was not worthy of Rhaegar.[20] Ser Barristan Selmy thinks that Elia's looks could never match those of her lady-in-waiting, Ashara Dayne, next to whom the Dornish princess was "a kitchen drab".[15] 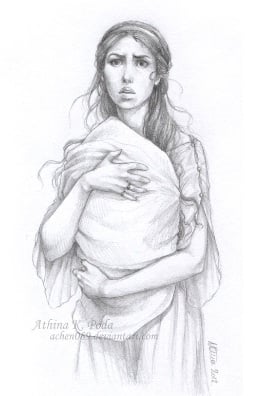 Daenerys: ... that was the tourney when he crowned Lyanna Stark as queen of love and beauty! Princess Elia was there, his wife, and yet my brother gave the crown to the Stark girl, and later stole her away from her betrothed. How could he do that? Did the Dornish woman treat him so ill?
Barristan: It is not for such as me to say what might have been in your brother’s heart, Your Grace. The Princess Elia was a good and gracious lady, though her health was ever delicate.[14]

I grant you, it was done too brutally. Elia need not have been harmed at all, that was sheer folly.[25]

Justice is in short supply this side of the mountains. There has been none for Elia, Aegon or Rhaenys.[30]

EEEEELLLLLLIIIIIAAAAA! If you die before you say her name, ser, I will hunt you through all seven hells.[6]

It must have been the madness that led Aerys to refuse Lord Tywin's daughter and take his son instead, whilst marrying his own son to a feeble Dornish princess with black eyes and a flat chest.[12]

Princess Elia was a good woman, Your Grace. She was kind and clever, with a gentle heart and a sweet wit. I know the prince was very fond of her.[16]