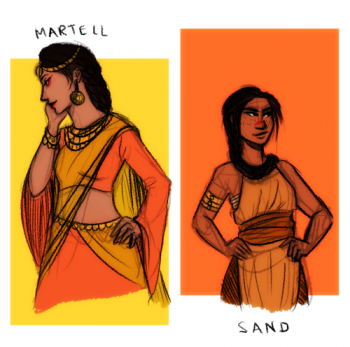 Elia Sand, known as El by her family[1] and Lady Lance by others,[2] is the oldest bastard daughter of Prince Oberyn Martell by his paramour, Ellaria Sand. She is one of the Sand Snakes.[4]

Elia has a wild and haughty personality. She is fond of horses and jousting, and her weapon of choice is the lance. Her cousin Princess Arianne Martell thinks her sobriquet of Lady Lance was given to her by her father. Elia rides a black filly.[2]

Elia was born in 285 AC or 286 AC[3] the fifthborn daughter of Prince Oberyn Martell and the first by his longtime paramour Ellaria Sand. Elia was most likely named after her late aunt, Elia Martell, whom Oberyn was close to.[6] Elia and Obella worship their eldest sisters—Obara, Nymeria, and Tyene—and in turn are worshipped by their younger sisters, Dorea and Loreza.[1]

Princess Arianne Martell mentions to Ser Arys Oakheart that she is not permitted to see her cousins by her father, Doran.[7] Elia is sent with her mother and three younger sisters to the Water Gardens, where she and Obella become the terror of the pools.[8]