From A Wiki of Ice and Fire
Jump to: navigation, search
For other uses, see Nymeria (disambiguation).

Nymeria Sand, nicknamed Lady Nym, is a bastard daughter of Oberyn Martell and a noblewoman from Volantis. She is the second oldest of the infamous Sand Snakes, so named for their bastard origin and the nickame of their father, the "Red Viper". In the television adaptation Game of Thrones she is portrayed by Jessica Henwick and stated to be the daughter of a YiTish noblewoman instead of a Volantene one.

Nymeria is twenty-five years old, slim and slender as a willow, with straight black hair worn in a long braid which pulls back from a widow's peak.[1][4] She has dark eyes[1] which are large and lustrous.[4] Her full lips are wine red and curve in a silken smile,[1][4] and she has high cheekbones.[1] Areo Hotah describes Nym as having pale white skin in A Feast for Crows[1][3] but mentions her olive skin in A Dance with Dragons.[4] Nymeria has all the beauty that her elder sister Obara Sand lacks but is no less deadly.[1] Although elegant, Nym is vengeful.[4]

Nymeria dresses gracefully in shimmering lilac robes with a silk cape of cream and copper,[1] and she also owns a yellow silk gown so sheer it reveals spun gold and jewels worn underneath.[4] Nymeria rides a gold sand steed with a mane like white silk.[1] Nym usually conceals a dozen daggers on her person[4] and is proficient with the hidden blades.[1]

Nymeria is good friends with Jeyne and Jennelyn Fowler.[5]

Nymeria's mother comes from the noblest blood of Volantis,[1] the Free City where Nym was born.[6]

Young Nym sometimes joined in play at the Water Gardens with her sister, Tyene Sand, her cousin, Princess Arianne Martell, Garin, Andrey Dalt, and Sylva Santagar.[5] Arianne keeps in her boot a throwing knife gifted to her by Nymeria.[7] 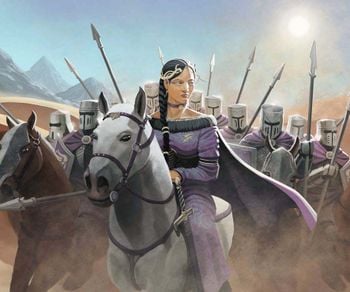 Nymeria Sand and her guard - by Aurelien Hubert © FFG

Nymeria is abed with the Fowler twins, Jeyne and Jennelyn, when she is told of the death of her father, Prince Oberyn Martell, in King's Landing.[1] Ser Daemon Sand sends her a raven explaining how Ser Gregor Clegane was poisoned by Oberyn and is now dying.[1]

Accompanied by a dozen mounted spearmen, Nymeria meets Doran Martell, the Prince of Dorne and Oberyn's elder brother, en route from the Water Gardens to Sunspear. She demands vengeance for the death of her father and rejects the offer Lord Tywin Lannister made Doran for Gregor's head. Instead of open war, Nymeria wants to assassinate Tywin, his children Queen Regent Cersei and Ser Jaime Lannister, and his grandchild, King Tommen I Baratheon. After visits from Nym's other sisters, Doran has the Sand Snakes arrested and confined in the Spear Tower of Sunspear.[1]

Nymeria and her sisters are released and are present at the feast at Sunspear when Ser Balon Swann presents the Mountain's skull to Doran. Balon seems discomforted by her silk gown. When Balon tells the manner of Gregor's death, Nymeria celebrates his suffering. When Ricasso raises a toast to King Tommen, Nym declines with a flick of her wrist.[4]

Doran sends Nymeria to King's Landing to take the vacant Dornish seat on the small council.[4] 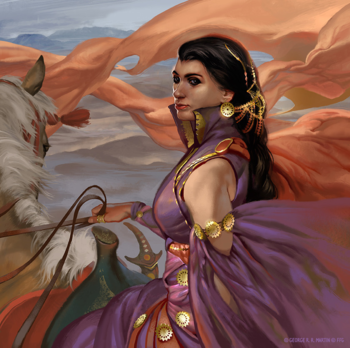 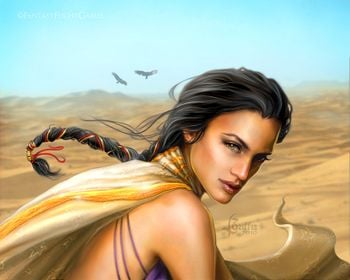 You know the Fowler words? Let Me Soar! That is all I ask of you. Let me soar, Uncle.[1]

Nymeria: Obara would make Oldtown our father's funeral pyre, but I am not so greedy. Four lives will suffice for me. Lord Tywin's golden twins, as payment for Elia's children. The old lion, for Elia herself. And last of all the little king, for my father.


Doran: The boy has never wronged us.


Nymeria: Only royal blood can wash out my father's murder.[1]
—Nymeria and Doran Martell

Ellaria: Where does it end?


Nymeria: It ends in blood, as it began. It ends when Casterly Rock is cracked open, so the sun can shine on the maggots and the worms within. It ends with the utter ruin of Tywin Lannister and all his works.
Ellaria: The man died at the hand of his own son. What more could you wish?


Nymeria: I could wish that he died at my hand. If he had, his dying would not have been so easy.[4]
—Ellaria Sand and Nymeria

Doran: We need a voice in council, an ear at court. Be careful, though. King's Landing is a pit of snakes.
Nymeria: Why, Uncle, I love snakes.[4] 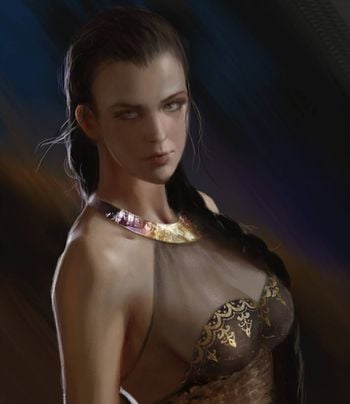 Nymeria was least dangerous when nearly naked. Elsewise she was sure to have a dozen blades concealed about her person.[4]

The Lady Nym. But no lady, if even half of what Qyburn reports is true. A bastard daughter of the Red Viper, near as notorious as her father and intent on claiming the council seat that Prince Oberyn himself had occupied so briefly.[8]