From A Wiki of Ice and Fire
Jump to: navigation, search
"Mace" redirects here. For the mace-and-dagger Hand, see Qarlton Chelsted. For the weapon, see Armament.

Mace Tyrell is the Lord of Highgarden, Lord Paramount of the Mander, Defender of the Marches, High Marshal of the Reach, Warden of the South, and head of House Tyrell.[6] In the television adaptation Game of Thrones he is portrayed by Roger Ashton-Griffiths.

Mace is a handsome and once-powerful-looking man who has since turned fat.[11] He has curly brown hair and cuts his beard, which has white and grey specks in it, into a triangular shape.[12][13] He is often red-faced.[13][14] Cersei Lannister thinks of Mace as the same age as her father, Lord Tywin Lannister, although Mace is closer in age to her than to Tywin.[13]

Mace has a generally jovial personality.[12] He thinks himself a great warrior,[15] although his reputation rests solely on the victory over Robert I Baratheon in the Battle of Ashford during Robert's Rebellion, which had largely been won by Mace's bannerman, Lord Randyll Tarly, before Mace arrived at the battlefield,[12][16] and the command Mace held during the siege of Storm's End later that war, which ended when Mace dipped his banners to Lord Eddard Stark.[12] Mace is ambitious, wishing to see a grandchild of his on the Iron Throne.[1] Despite that, his mother, Lady Olenna Tyrell, can easily hector him, and so influence his decisions.[17] Mace is considered an oaf by his mother[1] and by Cersei Lannister,[18] and a fool by Prince Oberyn Martell[2] and Cersei.[13] His favorite son is Loras, the youngest,[19] and his closest friend is Lord Paxter Redwyne,[19] his brother-in-law. Mace has a great dislike for Dornishmen, especially Prince Oberyn, who accidentally crippled Mace's heir, Willas.[12]

Mace dresses in green velvet trimmed with sable,[11] as well as a gold mantle over green.[3]

Mace became Lord of Highgarden once his father, Lord Luthor Tyrell, rode off a cliff while hawking.[1]

Mace was one of the attendees at the tourney at Harrenhal in 281 AC.[4]

During Robert's Rebellion, Mace was in command of troops from the Reach who marched against Lord Robert Baratheon of Storm's End. Mace is credited with defeating Robert in the Battle of Ashford, although the van under Lord Randyll Tarly achieved most of the victory before Mace's arrival at Ashford.[12] He then led the siege of Storm's End, which was successfully held by Robert's brother, Stannis Baratheon.[20] Mace and his closest bannerman, Lord Paxter Redwyne, surrendered to Robert's ally, Lord Eddard Stark, after the Sack of King's Landing.[21]

According to Prince Oberyn Martell, Mace encouraged his heir, Willas Tyrell, to participate in tourneys before he was ready, leading to the accidental crippling of Willas by Oberyn.[2] Some of the Iron Throne's debts under the new king, Robert I Baratheon, are owed to Lord Mace.[22] 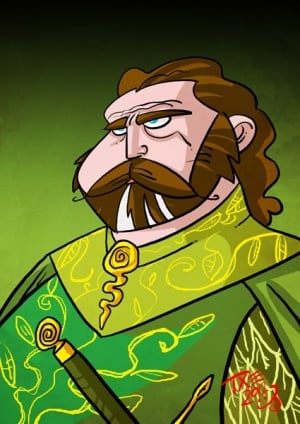 Mace Tyrell by The Mico ©.

After the death of King Robert I Baratheon, Mace and his brothers,[N 1] uncles, and sons are ordered to come to King's Landing to swear fealty to the new king, Joffrey I Baratheon.[23] Instead, Mace and his sons crown Robert's youngest brother, Renly Baratheon, at Highgarden, where Renly also weds Mace's daughter, Margaery Tyrell.[24]

Mace serves Renly as Hand of the King.[25] While Renly slowly marches toward King's Landing with a huge host, Mace remains at Highgarden with ten thousand men.[26] Mace closes the roseroad,[27] leading to famine and rioting in the capital.[28]

Renly is slain at Storm's End by a shadow assassin sent by Melisandre;[29] Margaery claims the marriage was unconsummated.[30] Lord Petyr Baelish rides to Bitterbridge to meet Mace's angry son, Ser Loras Tyrell,[19] and then to Highgarden to meet with Mace and his mother, Lady Olenna Tyrell.[31] Littlefinger negotiates an alliance between Houses Baratheon, Lannister, and Tyrell, including a marriage between King Joffrey and Margaery. Mace and his two younger sons, Ser Garlan and Ser Loras, wait with a huge host at Tumbler's Falls, where they are joined by Lords Tywin Lannister, Mathis Rowan, and Randyll Tarly. The combined army floats on Mace's fleet of barges along the Blackwater Rush toward the capital. They disembark half a day from King's landing, marching on to defeat Stannis Baratheon.[32] Mace commands the host's left wing during the Battle of the Blackwater.[33] 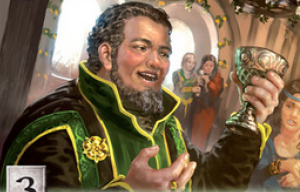 After the Battle of the Blackwater, the victorious great lords meet to divide the spoils, of which Mace is granted the lands of House Florent for his second son, Garlan Tyrell.[7] Mace, who is named master of ships,[7] and his entourage are housed in the Maidenvault.[1] As part of the alliance, Mace insists that his youngest son, Loras, join the Kingsguard to protect his sister, Margaery.[31] Mace refuses Tywin's offer to wed Willas Tyrell to the widowed Queen Dowager Cersei Lannister.[17]

As a wedding gift, Mace gives King Joffrey a seven-sided wedding chalice decorated with great houses: ruby lion, emerald rose, onyx stag, silver trout, blue jade falcon, opal sun, and pearl direwolf.[34] Mace removes Margaery's maiden cloak during her wedding to Joffrey. With the War of the Five Kings seemingly winding down, Mace complains there are no victories left for him.[27] King Joffrey chokes to death during the wedding feast.[27]

Mace is meeting with Tywin and Prince Oberyn Martell when Ser Jaime Lannister returns to the capital.[35] Mace, Tywin, and Oberyn serve as judges at the trial of Tyrion Lannister for the murder of Joffrey.[36] Mace wants Tyrion dead because his daughter was drinking from the chalice that contained the poison that killed Joffrey.[3] However, Littlefinger reveals to Sansa Stark that Mace's mother, Lady Olenna Tyrell, poisoned Joffrey.[31]

Cersei, the Queen Regent for her second son, the boy king Tommen I Baratheon, does not trust Mace and his friends from the Reach.[37] Tywin Lannister had wanted Mace's uncle, Garth Tyrell, to become master of coin, but Cersei countermands her late father's decision and instead names Lord Gyles Rosby.[37] Cersei refuses to name Mace as Hand of the King, fearing he conspired with Tyrion to murder Tywin.[13] Cersei names Aurane Waters as lord admiral.[38]

Cersei follows Jaime's suggestion[15] to task Mace with capturing Storm's End, which is held by Ser Gilbert Farring for Stannis.[39] After Margaery weds King Tommen in the royal sept of the Red Keep, Mace sets out for Storm's End with Lord Mathis Rowan and half the Tyrell strength.[40][41]

With Lord Tyrell gone from the capital, Cersei plots against his daughter, Queen Margaery.[38] Accusations of immorality lead to the imprisonment of Margaery by the Faith of the Seven. When Mace receives news of this he leaves the siege of Storm's End and marches his army back to King's Landing, leaving Lord Rowan to continue the siege with fewer men. Cersei allows Aurane to launch their new dromonds on the Blackwater to deter Mace, but Aurane absconds for open waters with the ships.[42] The High Sparrow has Cersei arrested within the Great Sept of Baelor.[42]

At Volon Therys, Ser Laswell Peake hints to Harry Strickland that the Golden Company still has friends in the Reach, and that Mace overestimates his strength.[43]

Mace arrives at King's Landing to find that his daughter Margaery and her cousins have already been released by the High Sparrow, given the weak evidence against them. They are turned over to the custody of Mace's bannerman, Lord Randyll Tarly, whose army reached the city first from Maidenpool. The girls' release is conditional on Randyll's holy oath to return them for trial. Cersei is stripped of the regency. Her uncle, Ser Kevan Lannister, arrives in the city and is made regent to King Tommen. To placate House Tyrell following Cersei's accusations, Kevan names Mace as Hand of the King, Lord Tarly as justiciar, and Lord Paxter Redwyne as lord admiral.[44]

Despite numerous threats facing the Iron Throne, including Aegon Targaryen and the Golden Company, Mace refuses to march his army from the city before Margaery's trial. Kevan grows increasingly resentful of Mace's apparent insatiability. Mace adds a hundred of his own men to the City Watch of King's Landing and plans a new Tower of the Hand double the size of its predecessor,[45] which Cersei had burned with wildfire.[40] Mace seats himself on an oaken throne carved in the shape of a hand, and he intends to name his uncle Garth as lord treasurer.[45] Mace is unaware that Nymeria Sand is traveling from Dorne to the capital to join the small council.[45]

There is no greater pleasure than to serve the King's Grace. If I was deemed worthy to join your royal council, you would find none more loyal or true.[11]

—Mace to Joffrey I Baratheon

Is there anything as pointless as a king without a kingdom? No, it's plain, the boy must abandon the riverlands, join his forces to Roose Bolton's once more, and throw all his strength against Moat Cailin. That is what I would do.[12]

Mace: Once Paxter Redwyne sweeps the ironmen from the seas, my sons will retake the Shields. The snows will do for Stannis, or Bolton will. As for Connington ...


Mace: ... as for Connington, what victories has he ever won that we should fear him? He could have ended Robert's Rebellion at Stoney Sept. He failed. Just as the Golden Company has always failed. Some may rush to join them, aye. The realm is well rid of such fools.[45]
—Mace and Randyll Tarly 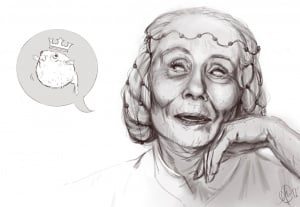 "The thought that one day he might see his grandson with his arse on the Iron Throne makes Mace puff up like ... now, what do you call it?" - art by Eeba-ism ©.

Olenna: The thought that one day he may see his grandson with his arse on the Iron Throne makes Mace puff up like ... now, what do you call it? Margaery, you're clever, be a dear and tell your poor old half-daft grandmother the name of that queer fish from the Summer Isles that puffs up to ten times its own size when you poke it.
Margaery: They call them puff fish, Grandmother.[1]

He has a prodigious appetite, this one.[12]

Robb Stark had won more battles in a year than the Lord of Highgarden had in twenty.[12]

The mob loved Margaery so much they were even willing to love Joffrey again. She had belonged to Renly, the handsome young prince who had loved them so well he had come back from beyond the grave to save them. And the bounty of Highgarden had come with her, flowing up the roseroad from the south. The fools didn't seem to remember that it had been Mace Tyrell who closed the roseroad to begin with, and made the bloody famine.[27]

His sigil ought to be a fat man sitting on his arse.[46]