Baelon Targaryen (son of Jaehaerys I)

From A Wiki of Ice and Fire
Jump to: navigation, search
For other characters with the same name, see Baelon Targaryen.

Prince Baelon Targaryen, also known as the Spring Prince, for the season of his birth, and the Brave, was a member of House Targaryen and was the fourth born child of King Jaehaerys I Targaryen and Queen Alysanne Targaryen. He had three sons himself, Princes Viserys, Daemon and Aegon. Baelon was a dragonrider whose mount was Vhagar.[3][4]

At birth, Baelon was smaller than his older brother, Aemon. He was louder and lustier, however.[1] 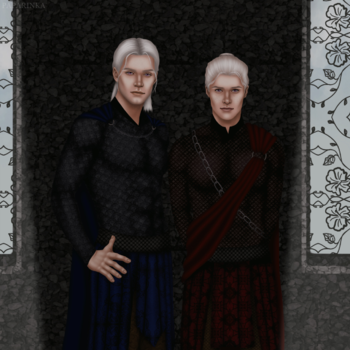 Baelon was born in 57 AC, two days after the start of spring had been announced by the Citadel. As such, he was dubbed the Spring Prince. Baelon was named after Baelon Targaryen, who had ruled as Lord of Dragonstone before Aegon's Conquest. The year after his birth, Baelon was present at the tourney at King's Landing on the anniversary of Jaehaerys's coronation.[1]

Baelon admired his older brother Aemon growing up. As soon as Baelon could walk, he began following Aemon around everywhere he went. When Aemon began training at arms with a wooden sword, Baelon was deemed to be too young to join. Regardless, Baelon brought a stick to the yard, and began whacking at Aemon. Baelon and Aemon would become very close, training together at arms every day in spirited contests which drew large crowds of spectators.[1]

The first time Baelon visited the Dragonpit, he hit Balerion on the snout, causing Ser Samgood of the Kingsguard to remark that he was either brave or mad. Ever since, Baelon was also known as Baelon the Brave.[1]

In 72 AC Baelon took part in a squires melee during a tourney held to celebrate Lord Darklyn's wedding, in which he was defeated by Aemon.[1] Baelon won his spurs the following year, at the age of sixteen, taking part in a tourney at Old Oak, entering the lists as a mystery knight called the Silver Fool. Baelon unhorsed Lord Rowan, Ser Alyn Ashford, both Fossoway twins, and Lord Oakheart's heir, Ser Denys, before falling to Ser Rickard Redwyne. Ser Rickard helped him to his feet, unmasked him, and knighted him on the spot. Prince Baelon remained at Old Oak only for the feast. Afterwards, he returned to King's Landing, where he became a dragonrider by claiming the dragon Vhagar.[4]

That same year, at the request of his father, Baelon began training his younger brother Vaegon. They continued to train for a year, but Vaegon had no skill and no interest in his training. After Baelon made Vaegon fight against their sister Alyssa, resulting in Vaegon leaving the yard humiliated, their trainings were at an end.

Baelon had always been close to his sister Alyssa, and married her in 75 AC. The sounds that came from their bedchamber during the bedding were a great amusement to the wedding guests. Their first child, a son who they named Viserys (possibly in honor of their late uncle), was born in 77 AC. Their second son, Daemon, was born in 81 AC.[4]

In 83 AC Baelon, together with his brother Aemon and father, King Jaehaerys I, ended the attempted invasion of the stormlands by Prince Morion Martell of Dorne. Mounted atop their dragons, they destroyed the Dornish fleet before it could even make landfall. Upon their return to King's Landing, Jaehaerys, Aemon, and Baelon received a riotous welcome as they had won a war without losing a single man, something not even Aegon I Targaryen had been able to boast.[4]

When Alyssa became pregnant for a third time, Baelon told his brother Aemon he was praying for a daughter. In 84 AC, Alyssa gave birth to a son, Aegon, after a difficult labor. Alyssa did not recover from Aegon's birth, however, and died within six months. Aegon died half a year later, just shy of his first nameday. Her death devastated Baelon, who always continued to honor her memory.

A few years after Alyssa's death, Baelon's young, ambitious sister Viserra tried to seduce him, hoping to end her betrothal to Lord Theomore Manderly. She sneaked into his bedchamber, and waited naked in his bed for him to arrive. When Baelon found her, he was unresponsive to her advances, and instead sent her away.[4] 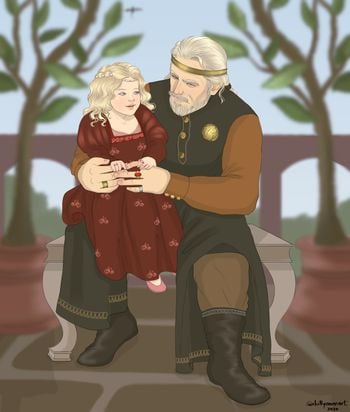 In 92 AC, Prince Aemon was slain on Tarth by one of the Myrish exiles who occupied the eastern part of the isle. Baelon flew on Vhagar to Tarth to avenge his brother, and fought against the exiles with Dark Sister. He was cheered by crowds when he returned to King's Landing.[4]

Baelon was named Prince of Dragonstone and heir to the throne by King Jaehaerys after Aemon's death, ahead of Aemon's daughter and heir, Princess Rhaenys.[3][4] In 100 AC, Baelon was named Hand of the King, replacing Ser Ryam Redwyne of the Kingsguard.[2]

In 101 AC, Baelon complained of a stitch in his side during a hunting trip. The pain worsened after he returned to King's Landing, and he eventually became bedridden in the Tower of the Hand. After five days of illness, Baelon died of a burst belly. His funeral pyre was personally lit by his father, King Jaehaerys.[2][3]

I slew a thousand of them, but it will not bring him back.[4]

They call me Baelon the Brave, but you are far braver than me. I would sooner fight a dozen battles than do what you've just done.[4]

—Baelon to Alyssa, after the birth of their son Aegon

—Samgood of Sour Hill in the Dragonpit

You will be a great king, even greater than your father.[4]

—Alysanne's last words to her son

Baelon was married to his younger sister, Alyssa, and had three sons with her: Viserys, Daemon, and Aegon. Alyssa died in 84 AC, the same year Aegon was born, following a difficult labor. Aegon died the following year, just shy of his first nameday.[5][4] Baelon's granddaughter by Viserys, Rhaenyra Targaryen, was born in 97 AC.[4] Baelon would eventually have seven grandchildren (five who survived to adulthood), but Rhaenyra is the only one he has known in his lifetime.[5] His granddaughter, Baela Targaryen, was named after him.[2]