From A Wiki of Ice and Fire
Jump to: navigation, search
For her granddaughter of the same name, see Laena Velaryon (daughter of Alyn).

Lady Laena Velaryon was the eldest child and only daughter of Lord Corlys Velaryon and Princess Rhaenys Targaryen. She was the second wife of Prince Daemon Targaryen and gave birth to his twin daughters, Rhaena and Baela Targaryen.[2] Laena was a dragonrider and rode the dragon Vhagar. She died from complications of childbirth.[3]

Laena had a great mane of silver-gold ringlets that fell down past her waist.[3][1]

By the age of twelve, Laena had freshly flowered, and was considered a fiery young girl. It was said she had inherited the beauty of her mother, Rhaenys Targaryen, and the bold, adventurous spirit from her father, Corlys Velaryon. By two-and-twenty, Laena had grown into a tall, slender, and beautiful woman. According to Mushroom, she "was almost as pretty as her brother".[3][1]

Laena loved to fly, and according to the maester of Driftmark, showed "far more interest in flying than in boys".[3][1] 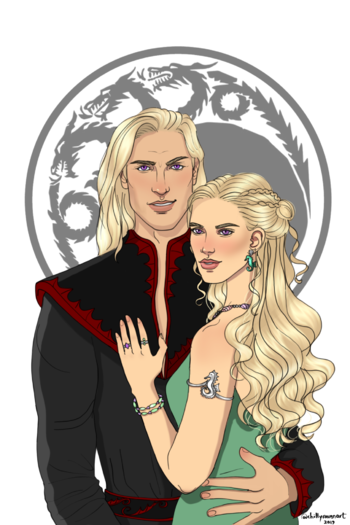 Laena and Daemon Targaryen, by Chillyravenart

Laena was born in late 92 AC.[N 1] She was the daughter of Lord Corlys Velaryon and Princess Rhaenys Targaryen, and the great-granddaughter of King Jaehaerys I Targaryen.[1] Princess Rhaenys's father, Prince Aemon Targaryen, the eldest son and heir of King Jaehaerys I, died shortly after Rhaenys learned she was pregnant. Although Rhaenys was Aemon's heir, Jaehaerys I named his second son, Prince Baelon, as his new heir, passing over Rhaenys and her potential unborn son. The unborn Laena, also referred to as "the boy in the belly", was subject of much debate on the succession until her birth.[1]

In 101 AC, Laena's claim to the Iron Throne was put forward once more during the Great Council, but she was passed over, together with her mother, on account of her sex.[4][1]

By 105 AC, Laena had become a dragonrider by claiming the largest Targaryen dragon left alive, Vhagar. Following the death of Queen Aemma Arryn in late 105 AC, Grand Maester Runciter urged King Viserys I Targaryen to remarry and suggested the twelve-year-old Laena as a bride, so Viserys could heal the rift between House Targaryen and House Velaryon. Viserys married another noblewoman, however, and although this angered Laena's father, Laena herself was untroubled. According to a letter the maester of High Tide wrote to the Citadel, Laena was interested more in flying than boys.[1][3] At the age of twelve, Laena was betrothed to a son of the Sealord of Braavos. When King Viserys I married Alicent Hightower in 106 AC, House Velaryon was noticeably absent from the wedding.[1][3] 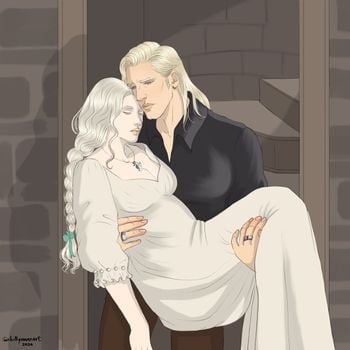 Daemon carries Laena's body back to her bed, by Chillyravenart

When the Sealord died, Laena's betrothed squandered his father's money and power and came to Driftmark. There, for nearly ten years, Laena's father repeatedly found ways to postpone their wedding, unwilling to let it go through but unable to gracefully break the betrothal. When Prince Daemon Targaryen arrived on Driftmark in 115 AC, the singers claim he fell in love with Laena, although others believe he saw her as a means to further his ambition. He insulted Laena's betrothed until the boy challenged him to a duel, in which he was killed by Daemon with Dark Sister. Laena wed Daemon a fortnight later.[1][3]

Aware that the king and court would not be pleased with their marriage, Laena and Daemon flew on their dragons to Pentos, where they were hosted by the Prince of the city. From Pentos, Daemon and Laena traveled to Volantis, up the Rhoyne to Qohor and Norvos. They eventually returned to Pentos, where Laena discovered she was pregnant. Laena and Daemon remained in Pentos for the remainder of her pregnancy. In 116 AC, in Pentos, Laena gave birth to their twin daughters, Rhaena and Baela. When the children were half a year old, Laena sailed with them to Driftmark, while Daemon flew their dragons home.[1][3]

Laena became good friends with her good-sister, Rhaenyra Targaryen. Laena and Daemon would often visit Rhaenyra on Dragonstone, and Rhaenyra would often visit them on Driftmark. In 118 AC, Laena's two-year-old twins were betrothed to Rhaenyra's two eldest sons, with the blessing of King Viserys I. In 119 AC, Laena became pregnant again. During the first few days of 120 AC, Laena went into labor. Following a day and night of labor, she gave birth to a twisted and malformed son, who died within an hour of birth. With all her strength gone from her labor and weakened further from grief over her lost child, childbed fever set in. Neither Driftmark's maester nor Maester Gerardys from Dragonstone could heal her. After three days of sickness, Laena died. It is said that she attempted to reach Vhagar to fly one more time before she died, but collapsed on the tower steps, where she died. Daemon carried her back to bed, where he sat vigil over Laena's body together with Rhaenyra.[1][3]

When Laena's daughter Baela became pregnant in 133 AC, she swore to her husband, Lord Alyn Velaryon, to name their first born child Laena if the child was a girl.[5] At the child's birth the following year, Baela named her daughter Laena, in her mother's honor.[6]

Her ladyship shows far more interest in flying than in boys.[3]