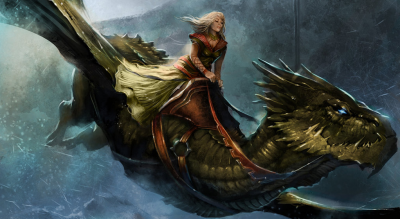 Dragons are intelligent creatures[2] who can be trained to serve as battle mounts and understand vocal commands. They are said to be capricious in nature,[3] and have to be trained, to keep them from laying waste to everything around them.[4]

A person may become a dragonrider at any age, much like horses and their riders; some when they are very young, some as teenagers, some not until adulthood.[5] To ride a dragon, a person has to bond with the dragon. Once the dragon and the rider have bonded, that dragon will not allow anyone else to mount it while its rider lives, no matter how familiar said person might be to the dragon.[6] For example, when Rhaenyra Targaryen's son Joffrey Velaryon attempted to mount her dragon Syrax, Syrax shrugged him off mid-flight, causing him to fall to his death.[6] Dragons are, however, willing to accept another person upon their backs when their own rider has mounted as well; the dragon Vhagar accepted young Lord Ronnel Arryn upon his back when Queen Visenya Targaryen gave him a ride,[1] and a century later was willing to allow Alys Rivers to mount her when her current rider, Prince Aemond Targaryen, had also mounted.[6] At some point, it became custom among members of House Targaryen to ensure the bonding with dragons by placing unhatched dragon eggs in the cradles of their children. Whilst the dragons still lived, most of these eggs hatched.[7][8] Even after the death of the last dragon in 153 AC[9] this custom continued,[10] though none of the eggs hatched.

The lifespan of a dragon is significantly longer than the lifespan of its rider. When the rider of a dragon dies, that dragon can bond with a new rider.[6] It is generally believed that Valyrian heritage plays a part is being able to bond with a dragon; In the Valyrian Freehold, the dragonlord families frequently married brother to sister to keep the bloodline pure,[11] and during the civil war known as the Dance of the Dragons, Prince Jacaerys Velaryon called upon Targaryen bastards and their descendants, the so-called "dragonseeds", to try and mount one of the six riderless dragons on Dragonstone.[6] Regardless, men without Valyrian descent made their attempt as well.[6] Nor is the possession of Valyrian blood (no matter how directly) a guarantee that bonding with a dragon will be succesfull.[7][12] Dragons who have been ridden before and thus are more accustomed to the presence of men might be more willing to accept a new rider earlier than wild dragons who had grown to adulthood without having ever been ridden.[6]

Only a few known dragonriders have outlived their dragons. Although none of these riders bonded with a second dragon, the possibility exists that they could have. When Prince Viserys Targaryen's dragon Balerion died, according to George R. R. Martin, "[Viserys] did not take a second dragon",[13] leaving the possibility that, had Viserys desired a new dragon, he could have attempted to claim one. Additionally, following the death of her dragon Syrax, Queen Rhaenyra Targaryen insisted on finding more dragon eggs, as she "must have another dragon".[6] Whether King Aegon II Targaryen planned to hatch another dragon egg to claim the dragon after the death of his mount Sunfyre is unknown. 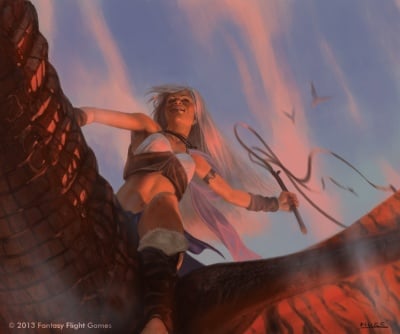 Although the dragons in question were too young to be ridden, Princess Jaehaera and Prince Jaehaerys Targaryen had bonded to their dragons, Morghul and Shrykos, respectively.

The first Ser Artys Arryn was said to have ridden upon a huge falcon, but Archmaester Perestan suggests that this possibly was a distorted memory of dragonriders seen from afar.[14]

The escaped slaves who founded Braavos in a distant lagoon believed that the frequent fogs in the lagoon would help hide them from the eyes of the dragonriders flying overhead.[15]

Most of the dragonlords, the noble dragonriding families of the Valyrian Freehold, had been at Valyria when the Doom occurred; None of them survived. Some dragonriders had been in Tyrosh and Lys at the time of the Doom, but they were killed with their dragons in the upheaval that followed. The dragonrider Aurion, who had been at Qohor, led an army to Valyria to reestablish the Valyrian Freehold, but disappeared with his army and dragon. This made the Targaryens the only dragonriders to survive, as they had relocated from the Freehold to Dragonstone near the Seven Kingdoms twelve years before.[16]

King Aerys II Targaryen became convinced that Lord Denys Darklyn would not have dared to defy him if Aerys had been a dragonrider.[17]

Queen Daenerys Targaryen mounts the dragon Drogon for the first time,[18] becoming the first dragonrider in a century and a half.

Prince Quentyn Martell attempts to mount one of the dragons Viserion and Rhaegal, on account of his Targaryen ancestry.[19] His attempt ends in failure, when, focused on Viserion, Quentyn does not notice Rhaegal behind him. The dragon bathes him in dragonfire.[12] Quentyn dies three days later.[20]

...it was said that even Aegon the Conqueror never dared mount Vhagar or Meraxes, nor did his sisters mount Balerion the Black Dread. Dragons live longer than men, some for hundreds of years, so Balerion had other riders after Aegon died... but no rider ever flew two dragons.[21]