Alys Rivers was a bastard of House Strong, a wet nurse at Harrenhal, and a bedmate of Prince Aemond Targaryen.[3] She could allegedly see visions of the future,[4] and she was considered a witch queen by some.[1]

Alys had long black hair.[4] She is said to have looked younger than her years.[3]

According to Aemond Targaryen, Alys could see visions in storm clouds, pools of water, and flames.[4]

Septon Eustace considered Alys to be a simple slattern.[3]

According to Grand Maester Munkun and Septon Eustace, Alys was a bastard sired by Lord Lyonel Strong on an unknown woman when he was young. Munkun claims Alys was a serving wench with an interest in potions, while Eustace states she was a woods witch. The fool Mushroom instead claims Alys was from an older generation and she had served as a wet nurse to Lyonel's sons, Harwin and Larys, and possibly even to Lyonel. Mushroom wrote that Alys was an enchantress who bathed in maidens' blood to remain youthful. Both Eustace and Munkun considered Mushroom's claims fantastical, but even they agreed that Alys looked unusually young for her age, as she had to be at least forty by the outbreak of the Dance of the Dragons.[3]

Although all of Alys's children were stillborn, she served as a wet nurse to many children at Harrenhal.[3] 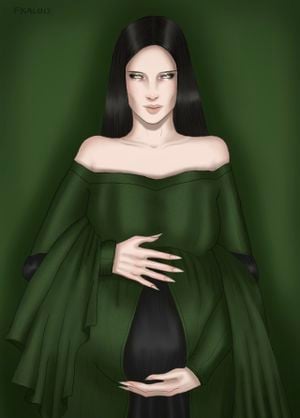 Alys was at least forty years of age during the Dance of the Dragons, although she appeared younger. She survived the assault on Harrenhal by Prince Daemon Targaryen and the blacks.[3]

After the greens retook Harrenhal, Prince Aemond Targaryen ordered the deaths of the remaining members of House Strong at the castle. The dragonrider spared Alys's life, however, and took the older woman for his bedmate as a spoil of war.[4] When informed of the greens' defeat in the Battle by the Lakeshore, Alys prevented an enraged Aemond from strangling the squire who brought the message to Harrenhal. Eustace disagrees with Mushroom's claim that Alys used potions to entice Ser Criston Cole, Lord Commander of the Kingsguard and Hand of the King, in addition to Aemond.[4]

While Criston marched south along the Gods Eye, Aemond began burning the riverlands with Vhagar. When Lady Sabitha Frey seized the undefended Harrenhal, she found only Alys within, with the wet nurse claiming to be pregnant with Aemond's child. Alys eventually escaped with Aemond when the prince returned to Harrenhal and chased away Sabitha.[4]

When Prince Aemond returned to Harrenhal to confront Prince Daemon and Caraxes, he took the pregnant Alys with him. Aemond told Daemon that it was Alys who told him where to find him, as she had seen in her visions.[4] Aemond left Alys on the ground, kissing her one last time, before Vhagar and Caraxes leapt as one into the sky above the Gods Eye with their dragonriders. The pregnant Alys watched the ensuing Battle Above the Gods Eye atop Kingspyre Tower in Harrenhal below. Aemond and Daemon were both slain in their duel in 130 AC.[4]

Larys Strong, Lord of Harrenhal, was executed in 131 AC during the Hour of the Wolf.[5]

In 132 AC during the regency of Aegon III, a number of broken men and predatory outlaws began to gather at Harrenhal under the rule of a sorcerous witch queen. Tasked by Ser Tyland Lannister, Hand of the King, with reclaiming the castle, Ser Regis Groves of the Kingsguard and Ser Damon Darry marched from King's Landing and Castle Darry to Harrenhal with a hundred men.[1]

The alleged witch queen was revealed to be Alys, who claimed to be the widow of Prince Aemond Targaryen. She presented a young boy as their trueborn son and the rightful king instead of Aegon III Targaryen. Regis abruptly died after insulting Alys. Some claim she used magic to burst his skull, while others state he was killed by crossbowmen or slingers. Alys's rabble then rode from Harrenhal and overwhelmed the loyalist men, with Damon leading thirty-two survivors back to Castle Darry.[1]

Alys sent a captured loyalist to Darry as a messenger the following day. The survivor claimed that a dozen other captives had been tortured to death, and that he had been cursed by Alys so that he would die if anyone laughed at his story. He said Alys had instructed him that any man who approached Harrenhal without submitting to its occupants would die. The man also insisted that he had seen a dragon inside. Despite Damon's assurance that no one would laugh at the messenger's story, an onlooker did so. The messenger then choked to death in moments, with some saying they had seen the imprints of a woman's fingers on his throat.[1]

Back in King's Landing, Tyland was troubled by Regis's death. Lord Unwin Peake disbelieved Damon's claims of dragons and magic, however, and the other regents agreed with Unwin's conclusion that outlaws were to blame. Aegon's regents concluded they would need to gather a larger force to recapture Harrenhal, but their plans were interrupted by Winter Fever in 133 AC.[1]

I have the dragon's bastard in me. I can feel his fires licking at my womb.[4]

Alys: Kneel before your king.
Regis: I do not kneel to bastards, much less the baseborn whelp of a kinslayer and a milk cow.[1]

Was she in truth a witch who lay with demons, bringing forth dead children as payment for the knowledge they gave her? Was she a simpleminded slattern, as Eustace believes? A wanton who used her poisons and potions to bind men to her, body and soul?[3]

Daemon: Who told you where to find me?
Aemond: My lady. She saw you in a storm cloud, in a mountain pool at dusk, in the fire we lit to cook our suppers. She sees much and more, my Alys.[4]

Don't come again unless you mean to bend your knees, she says. Any man who comes near her walls will die. There's power in them stones, and the widow's woken it. Seven save us all, she has a dragon. I seen it.[1]