From A Wiki of Ice and Fire
(Redirected from Witch)
Jump to: navigation, search 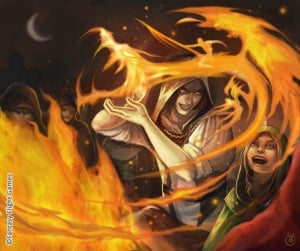 A firemage conjures a dragon made of fire, by Carolina Eade © Fantasy Flight Games 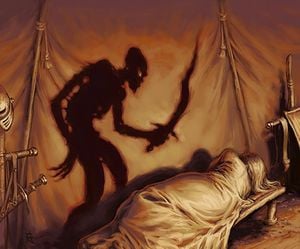 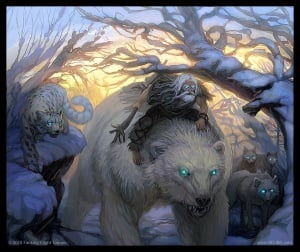 Other than the children of the forest, who are said to have been strong in magic, native magic in Westeros is rare. In days past, the greenseers of the children possessed incredible powers over nature, including skinchanging, slipping into the minds of beasts, and greensight, the power to foretell the future. Though the children of the forest and their greenseers have long passed from Westeros, there are still descendants of the First Men who possess those powers. The knowledge of the existence of skinchangers is exceedingly rare in Westeros, except perhaps among the free folk who live beyond the Wall. 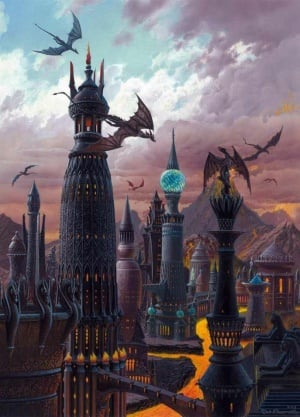 Valyria and its dragons, by Ted Nasmith ©

All Valyrian magic was rooted in blood and fire. It is said that they could set dragonglass candles to burning with strange, unpleasantly-bright light. With the obsidian candles, they could see across vast distances, look into a man's mind, and speak with one another though they were half the world apart.[17] It is often said that the old wizards of Valyria did not cut and chisel stone, but worked it with fire and magic as one might work clay.[18] The people of Valyria were strong in magic, and they used their powerful wizards and their dragons in conjunction with their armies to conquer most of western Essos. Dragons were controlled by whips, dragon horns, and sorcery.

In the flesh pits of Gogossos, Valyrian bloodmages mated animals to slave women to bring forth half-human creatures.[19]

Ordinarily, the Dothraki despise maegi, believing them to be women who lay with demons and practice the blackest of sorceries. Their powers are said to be vile and soulless.[20] However, according to Mirri Maz Duur, there are women of the Dothraki who know magics of "grass and corn and horse".[20]

In Qarth, the enigmatic warlocks of the House of the Undying practice curious rituals. Qartheen warlocks once bathed Samwell Tarly in aurochs blood to make him brave.[21] Shadowbinders, spellsingers, and aeromancers from Asshai are capable of great and terrible feats.[4]

There are firemages who can conjure ladders from the air that are made of fire and can stand forty feet high. The mage can climb up the ladder, each rung disappearing behind him, leaving nothing but silvery smoke. When he reaches the top, the ladder and he are both gone.[5] 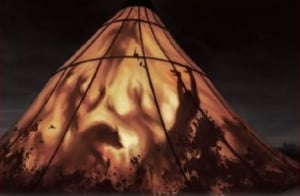 Mirri Maz Duur sacrifices Drogo's stallion and, unbeknownst to Daenerys Targaryen, the unborn Rhaego in her attempt to restore Khal Drogo. Daenerys then burns the maegi on Drogo's funeral pyre and wakes dragons.[22][2]

The Alchemists' Guild claim that spells required in the creation of wildfire have begun to work better and more efficiently than they have in many years.[15]

In Qarth Daenerys sees a firemage creating a ladder of flames that stands up to forty feet high and then dissappear along with the ladder. Quaithe explains that, half a year before, the man could bare wake fire from dragonglass and perform tricks with powders and wildfire until Daenerys, by hatching the first dragons in centuries, has caused the firemage's powers to grow.[5]

Qyburn is rumored to have lost his maester's chain for being involved in necromancy.[25] 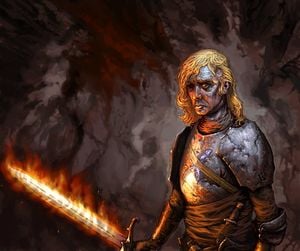 Thoros of Myr explains that he unexpectedly raised Beric Dondarrion from the dead after performing the last kiss.[26]

Dragon sightings are becoming more and more common in Essos.[27]

Thoros tells Brienne that Beric raised Catelyn Stark from the dead, passing the flame of life from him to her.[28]

A magical Valyrian glass candle in Marwyn's chamberas at the Citadel has ignited anew and it seems that the potency of magic in Westeros has increased. Miracles and abilities that were long thought lost now appear to be returning, although this is commonly neither known nor accepted.[27][17]

Melisandre uses a glamor to disguise Mance Rayder at Rattleshirt.[29]

Take a lesson, Bran. The man who trusts in spells is dueling with a glass sword. As the children did.[30]

Perhaps magic was once a mighty force in the world, but no longer. What little remains is no more than the wisp of smoke that lingers in the air after a great fire has burned out, and even that is fading. Valyria was the last ember, and Valyria is gone.[31]

The Horned Lord once said that sorcery is a sword without a hilt. There is no safe way to grasp it.[32]

The dragonlords of the old Freehold were strong in sorcery, and lesser men defied them at their peril.[13]

Fantasy needs magic in it, but I try to control the magic very strictly. You can have too much magic in fantasy very easily, and then it overwhelms everything and you lose all sense of realism. And I try to keep the magic magical — something mysterious and dark and dangerous, and something never completely understood. I don’t want to go down the route of having magic schools and classes where, if you say these six words, something will reliably happen. Magic doesn’t work that way. Magic is playing with forces you don’t completely understand. And perhaps with beings or deities you don’t completely understand. It should have a sense of peril about it.[33]