Rhaego is son of Daenerys Targaryen and Khal Drogo. He was named after his late uncle, Prince Rhaegar Targaryen.[1]

In the television adaptation Game of Thrones, Rhaego is portrayed by Wren Ros Elliot-Sloan.[2]

Rhaego is prophesied to be the stallion who mounts the world by the crones of the dosh khaleen at Vaes Dothrak just after the stallion heart ceremony.[1]

After Rhaego's father, Drogo, becomes sick from an infected wound, the sorceress Mirri Maz Duur saves Drogo's life by using blood magic. One of the effects of that magic is that Rhaego dies right before birth. According to Mirri Maz Duur, he was inhuman, hideously deformed and covered in dragon-like scales. He had the stub of a tail small leather wings, reminiscent of a bat. Rhaego was stillborn.[3]

During her fever dream, Daenerys Targaryen sees her son tall and proud, with Drogo's copper skin and her own silver-gold hair, violet eyes shaped like almonds. He smiles at her and begins to lift his hand towards her, but when he opens his mouth fire pours out. She sees his heart burning through his chest and in an instant he is gone, consumed like a moth by a candle, turned to ash.[3] 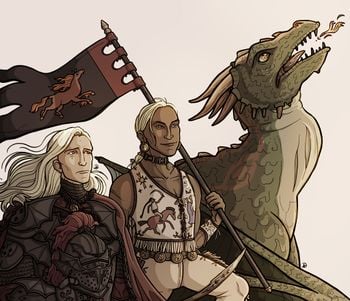 Rhaego, as he might have been, with his namesakes Rhaegar Targaryen and Rhaegal, by Amuelia ©

In the House of the Undying Daenerys sees a tall lord with copper skin and silver-gold hair standing beneath the banner of a fiery stallion, a burning city behind him, which appears to be a vision of what might have been had Rhaego survived to be the stallion who mounts the world.[4]

While in Daznak's Pit after witnessing the slaughter, Daenerys reflects that she once ate a stallion heart to give strength to her unborn son, but that did not save Rhaego when Mirri Maz Duur murdered him in her womb. She remembers the words of the Undying Ones:

Three treasons shall you know. She was the first. Ser Jorah was the second, Brown Ben Plumm the third. Was she done with betrayals?[5]

Shortly thereafter her dragon child Drogon appears in the skies above the pit.

Monstrous. Twisted. I drew him forth myself. He was scaled like a lizard, blind, with the stub of a tail and small leather wings like the wings of a bat. When I touched him, the flesh sloughed off the bone, and inside he was full of graveworms and the stink of corruption. He had been dead for years.[3]