The Undying Ones are the chief warlocks of Qarth,[1] dwelling in a chamber deep in the House of the Undying in Qarth.

The Undying Ones present themselves as beautiful wizards at the prime of their lives and power, with some wearing sumptuous robes, elaborate armor, or tall pointed hats. They include gown-clad women.[2] In actuality, however, the Undying Ones are ancient and withered. Through their drinking of the shade of the evening, their flesh, nails, and even the whites of their eyes have turned shades of blue and violet-blue.[2] 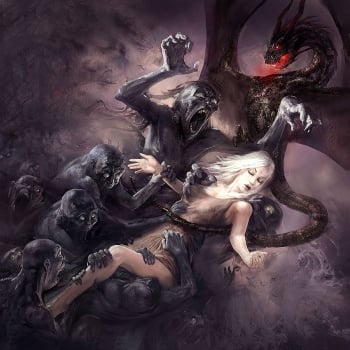 The Undying Ones attack Daenerys Targaryen, by Marc Simonetti ©

Pyat Pree, one of the warlocks of Qarth, informs Daenerys Targaryen that he will ask the Undying Ones to grant her an audience.[3] After being rejected by the Pureborn,[4] Daenerys decides to meet the Undying Ones.[2]

In a great hall within the House of the Undying, Daenerys finds a splendor of wizards who offer her knowledge and magic weapons. Drogon, one of Daenerys's dragons, points her to another door, however, so she abandons these wizards who call on her with sweet voices.[2]

In a gloomy chamber, Daenerys finds a blue and rotting human heart floating above a stone table, and in the darkness she perceives the true Undying Ones. Although they do not move and do not breathe, Daenerys hears them whisper. The Undying Ones show Daenerys a number of visions of past and future events, but as they do so they attack her and attempt to drain her life. Drogon rescues Daenerys, however, burning the Undying Ones with dragonflame and ripping apart the dark heart. Pyat Pree tries to attack Daenerys when she escapes from the building, but he is stopped by Jhogo and Rakharo.[2]

According to Xaro Xhoan Daxos, the Undying are all dead.[5]

When you come to the chamber of the Undying, be patient. Our little lives are no more than a flicker of a moth's wing to them. Listen well, and write each word upon your heart.[2]

Woman: Long have we awaited you.


King: We knew you were to come to us. A thousand years ago we knew, and have been waiting all this time. We sent the comet to show you the way.


Warrior: We have knowledge to share with you, and magic weapons to arm you with. You have passed every trial. Now come and sit with us, and all your questions shall be answered.[2]
—Three of the Undying Ones to Daenerys Targaryen

None of them are breathing, and they do not move, and those eyes see nothing. Could it be that the Undying Ones were dead?[2]

Drogon saved me when they would have drained my life from me. Drogon burned them all.[5]

Since George R. R. Martin has long been a fan of Doctor Strange,[6] the Undying Ones of Qarth may be a homage by Martin to demons of the same name who have fought Strange and the Defenders.