Xaro Xhoan Daxos is a merchant prince of Qarth. He is a member of the Thirteen, a prominent group of traders within the city. In the television adaptation Game of Thrones he is portrayed by Nonso Anozie as an immigrant from the Summer Isles.

Xaro is a languid, elegant man, pale and lean.[2][3] He has a bald head, and a great beak of a nose which is crusted with rubies, opals, and flakes of jade,[2] giving him the aspect of some strange glittery bird.[4] His fingers are long and elegant.[4] He can cry at will, a skill typical of Qartheen men.[4][3] Though he wishes to marry Daenerys Targaryen, it is implied he has a homosexual orientation.[4][3]

Xaro wears robes of maroon silk and cloth-of-gold.[3] He rides a camel with an ornate horned saddle.[4]

Xaro owns eighty-four vessels, including Vermillion Kiss, the galleas Silken Cloud, and his pleasure barge.[5][3] His palace is larger than a market town.[2] It contains gardens full of fragrant lavender and mint, a marble bathing pool stocked with tiny golden fish, and a scrying tower and warlock's maze. In some private chambers, the floors are green marble, and the walls are draped with colorful silk hangings that shimmer with every breath of air.[2] When Jhogo returns to Vaes Tolorro after discovering Qarth, he is accompanied by three representatives of the city, one of them being Xaro.[6] Having seen her dragons, Xaro escorts Daenerys Targaryen to Qarth, where he offers her use of his palace during her stay.[2] She thinks Xaro's palace makes Magister Illyrio's manse in Pentos look like a swineherd's hovel. The palace easily accommodates Daenerys's little khalasar and their horses. An entire wing is given over to her, and she has slaves to tend to her every need.[2]

Xaro gives Daenerys many gifts, including:

Xaro offers Daenerys his knowledge, telling her which members of the Pureborn to bribe, the ways of reaching the Pureborn, and who to go to next after she is rejected by them. Xaro also seeks to marry her, though Daenerys later learns he wishes to marry her so he can claim one of her dragons via a Qartheen marriage custom. It is also revealed that he does not seem interested in women, as Daenerys can tell that Xaro hardly deigns to notice her bare breast when she is wearing a Qartheen gown. Daenerys notices the beautiful boys who surround the merchant prince, flitting through his palace halls in wisps of silk.[4]

After the destruction of the House of the Undying, Xaro prevents the Thirteen from opposing Daenerys. Xaro offers to take her sailing around the Jade Sea. After his marriage offer is rejected, he tells Daenerys to leave the city.[5]

Aboard the Balerion, Daenerys contemplates the threats to her and thinks of Xaro. She hopes he is not among her enemies, but remembers that the Qartheen merchant had coveted her dragons.[7]

Xaro arrives on his ship Silken Cloud in Meereen to visit Daenerys. He claims to have defended Daenerys before the Pureborn. Xaro brings forth a gift of thirteen ships—including Banded Lizard, Narraqqa, and Pureborn Princess—stating that they are hers on the condition she sails from Slaver's Bay to Westeros as her presence has disrupted the slave trade which many cities of Essos, such as Volantis and Qarth, depend on for their economies. Daenerys thinks the galleys were provided by all of the Thirteen and not specifically by Xaro.[3] Xaro also provides Daenerys with a tapestry of the lands of Valyria from before the Doom.[3]

During Xaro's visit Daenerys again dons a Qartheen gown, leaving one breast bare in his honor. She notes that half of the men in the hall have stolen glances at her, but not Xaro. He warns her of many threats to her, including Pyat Pree. Daenerys has the ships he brought inspected by Groleo, but she later refuses the offer. Xaro's reply is to leave a bloodstained glove on a satin pillow, a message that Qarth has declared war on Daenerys.[3] 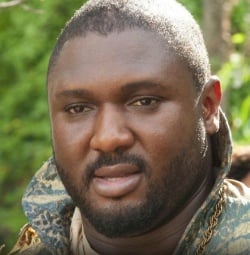 Nonso Anozie as Xaro in Game of Thrones

In the television adaptation, Game of Thrones, Xaro is an immigrant Summer Islander. He has black skin, thinning hair, and a beard. Xaro seeks to become the King of Qarth, in a coup where he kills his fellow Thirteen—the ruling council of Qarth—and assists Pyat Pree in stealing Daenerys's dragons. After defeating Pyat in the House of the Undying, Daenerys finds her handmaid Doreah in bed with Xaro. She punishes the pair by locking them in his vault, where they will most likely die.

I have no warships. War is bad for trade. Many times I have told you, Xaro Xhoan Daxos is a man of peace.[4]

A craven's knife can slay a queen as easily as a hero's.[3]

I no longer lust for dragons. I saw their work at Astapor.[3]

She would have been lost without Xaro.[4]

I warned you that Xaro and Pyat Pree were not to be trusted.[8]