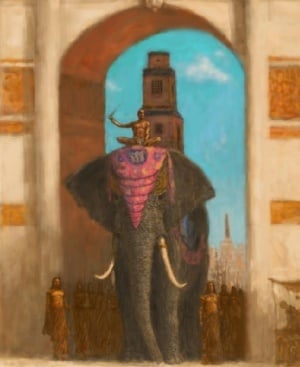 Ivory can come from tusks, like those of elephants; art by Marc Fishman.

Ivory is a white material from animal tusks and teeth.

Ivory is prized in the Slaver Cities and can be used in some cases instead of gold or silver.[1] Some women of Astapor use ivory combs.[2] The bronze harpy at the city's Plaza of Pride has eyes and pointed teeth of ivory.[2]

According to Corlys Velaryon, the shan of the Isle of Elephants has an ivory palace.[3]

The Prince of Pentos rides in a palanquin of ivory and gold.[4]

Cyvasse pieces can be carved of ivory and onyx[5] or ivory and jade.[6]

Adventurers from the Summer Isles and from Qarth have sought gems, gold, and ivory from the western and eastern coasts of Sothoryos, respectively.[7]

According to Maester Norren of Maidenpool, Prince Daemon Targaryen gave Nettles a hairbrush with an ivory handle.[8]

Ivory from Sothoryos was popular in King's Landing during the Lysene Spring.[9]

Shiera Seastar was fond of ivory.[10]

When Cersei Lannister wed King Robert I Baratheon, her uncle Gerion gave Robert a gilded dagger with an ivory grip and a sapphire pommel.[12]

Roro Uhoris sailed Cobblecat into the Shivering Sea to trade steel to the free folk for ivory, furs, amber, and obsidian.[13]

Ivory tusks are among the plundered items used by Euron Greyjoy to bribe ironborn.[15]

A Tyroshi brings the head of a dwarf to Cersei Lannister in a cedar chest inlaid with ivory flowers and vines, but Cersei insists the dead dwarf is not her disgraced brother, Tyrion.[16]

Graces provide an ivory chair for Daenerys to sit upon when she weds Hizdahr zo Loraq in Meereen.[18]

Among the tribute collected from the free folk passing through the Wall is an ivory phallus.[19]