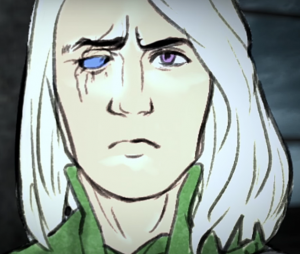 Prince Aemond Targaryen with a sapphire eye, from Game of Thrones Blu-ray

The Summer Isles are rich in gemstones like sapphires.[1]

Tobho Mott wears a sapphire as large as a pigeon's egg on a heavy silver chain around his neck.[2]

Prince Joffrey Baratheon has a slim coronet made of gold and sapphires.[3]

Lady Lysa Arryn has a necklace of sapphires and moonstones.[5][6]

Ser Wylis Manderly clasps his cloak with a silver-and-sapphire trident.[7]

Dagmer Cleftjaw has rings set with chunks of sapphire, garnet, and dragonglass.[8] Illyrio Mopatis has sapphires among his various rings.[9]

Tarth is called the Sapphire Isle because of the blue of its waters.[10]

After he lost his eyes, the legendary Symeon Star-Eyes is said to have replaced them with star sapphires.[11]

Prince Aemond Targaryen replaced his missing eye with a sapphire.[12]

When Cersei Lannister wed King Robert I Baratheon, her uncle Gerion gave Robert a gilded dagger with an ivory grip and a sapphire pommel.[14]

The eyes of Othor appear blue as sapphires after his body is found by the Night's Watch; the corpse later rises as a wight.[15]

To protect Brienne of Tarth, Ser Jaime Lannister tells Urswyck that Tarth is known as the Sapphire Isle. Unaware the island is so named because of the color of its waters instead of being rich in gemstones, the Brave Companions expect that Lord Selwyn Tarth will pay a large ransom for his daughter.[10][16]

Lord Robert Arryn wears a chain of gold and sapphires.[17]

Among the tribute collected from the free folk passing through the Wall is a broken sword with three sapphires in its hilt.[18]

See that you don't break any bones. The horse-faced bitch is worth her weight in sapphires.[10]

Secrets are worth more than silver or sapphires, Varys claimed.[19]