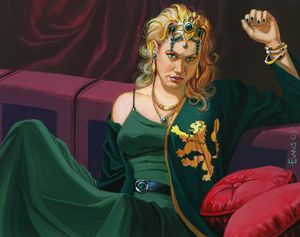 Queen Cersei Lannister often wears emeralds which match her green eyes.[1] She owns a tiara jeweled with emeralds[1] and a woven belt studded with emeralds.[2] Cersei has necklaces of emeralds[3] and diamonds with emeralds.[4] One of the queen's white gowns has swirls of tiny emeralds on its sleeves, and she also owns a golden hair net with larger emeralds.[5] Cersei has emeralds the size of as pigeon eggs on a golden ring[6] and a necklace.[7]

Lord Renly Baratheon clasps his half cape with an emerald brooch.[8]

Emeralds are among the decorations on the maester's chain of Grand Maester Pycelle.[8]

Illyrio Mopatis has emerald among his various rings.[9]

Emeralds are among the gems adorning the nose of Xaro Xhoan Daxos.[10] 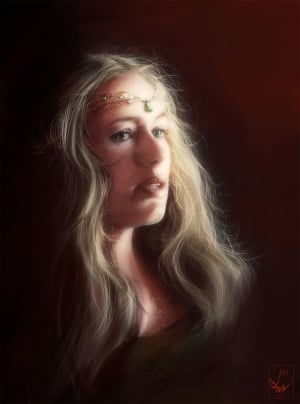 Emeralds have been found in the Summer Isles[11] and Sothoryos.[12]

Racallio Ryndoon was known to freely give his possessions, such as emerald rings, to those who admired them.[13]

At the tourney on Prince Joffrey's name day, Queen Cersei Lannister lost an emerald pendant by betting on her brother, Ser Jaime Lannister, who was unhorsed by Ser Loras Tyrell. The pendant was returned to the queen, however.[14]

Renly Baratheon wears a chain of gold and emeralds at the siege of Storm's End.[15]

While in the House of the Undying, Daenerys Targaryen has a vision of a warrior in shining emerald armor.[16]

During the Battle of the Blackwater, wildfire is reminiscent of jade and emerald.[17][18]

The seven-sided golden chalice given by Lord Mace Tyrell to King Joffrey I Baratheon has an emerald rose to represent House Tyrell.[19]