A Clash of Kings-Chapter 62 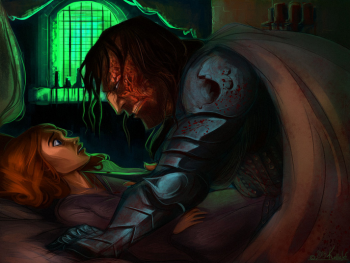 The Hound demands a song of Sansa - by Kallielef ©

Ser Lancel curses Cersei for calling her son back inside the Holdfast, when the king’s presence might have rallied the troops. He claims all is lost, and Cersei leaves the room. Sansa watches as Lancel falls to his knees, severely injured. She attempts to calm Cersei's guests and orders others to help Lancel receive medical care.

Dontos persuades her to lock herself in her room, and when Sansa arrives at her chambers, she finds Sandor Clegane hiding in the shadows. The Hound, drunk and battered from the fighting, tells her he lost, and that he should have killed Tyrion years ago. Sandor claims he is leaving King's Landing, maybe to head north somewhere. Clegane forces her to look at him, and then tells her, "I could keep you safe…No one would hurt you again, or I’d kill them."

Sandor then asks that she sing for him, as she had promised she would. She is too frightened to remember the words of the song he wants, and can only sing the Mother's Hymn. After that, some instinct makes her cup his cheek with her fingers, and she can feel tears on his cheeks. Sandor strips off his white cloak and leaves her room.

Later, Dontos returns to bring her the news--the battle is over, King’s Landing has been saved by the Tyrells and Lord Tywin and all their men. Lord Tywin held the right wing, Lord Randyll Tarly the center, and Mace Tyrell commanded the left. Yet it was the vanguard that won the battle, some say led by the ghost of King Renly who slew Ser Guyard Morrigen in single combat.