From A Wiki of Ice and Fire
Jump to: navigation, search
"Lancel" redirects here. For other characters with the same name, see Lancel Lannister (disambiguation).

Lancel Lannister is a member of House Lannister of Casterly Rock and is the eldest son of Ser Kevan Lannister. Lancel and his cousin, Tyrek Lannister, are squires to King Robert I Baratheon.[3]

A handsome and strong youth, Lancel has the thick sandy hair and green eyes of House Lannister. He has a wisp of a mustache.[4][5] The boy is said to closely resemble his cousin, Ser Jaime Lannister of the Kingsguard,[5] whom he admires.[6]

Lancel is humorless, self-assured, arrogant as a Lannister, and impatient.[4][5] Comely and well spoken,[7] Lancel is able to sing.[4] The youth is eager for glory.[8]

Robert I Baratheon insults his squires, the cousins Lancel and Tyrek Lannister, for not being able to fit armor on the fat king.[9]

After Robert is mortally wounded by a boar, Ser Barristan Selmy informs Lords Eddard Stark and Varys that Lancel had supplied wine to the king during the hunt in the kingswood.[11] When Varys asks Lancel about the hunt, the youth says he was given the wineskins from his cousin, Queen Cersei Lannister, who said they were her husband's favorite vintage.[12] 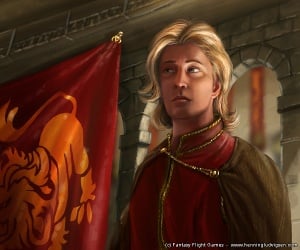 With Ser Jaime Lannister, her twin and lover, a captive of Robb Stark, Cersei sleeps with Lancel,[2] although the youth never finishes inside her.[5][6] Cersei, the regent for King Joffrey I Baratheon, insists that her cousin be knighted as Ser Lancel.[13] Tyrion Lannister, the acting Hand of the King, learns from his sister that the alcohol supplied by Lancel to Robert was strongwine fortified to be more potent than the king was accustomed.[14]

Lancel becomes Cersei's new favorite.[13] During one visit to Cersei's chambers in the Red Keep, Tyrion hears Lancel singing "The Seasons of My Love" to the accompaniment of a harpist and a piper.[4]

After Tyrion has Pycelle imprisoned, Cersei sends an emboldened Lancel to Tyrion to demand the release of the Grand Maester. Tyrion gets Lancel to admit his involvement in Robert's death and that he is sleeping with Cersei. Tyrion blackmails his shamed cousin into spying on Cersei for him.[5] The new knight later reveals to Tyrion that Cersei is discretely meeting with the Kettleblack brothers.[15]

In the royal sept at the Red Keep, Lancel informs Tyrion that Cersei plans for Prince Tommen to be sheltered at Rosby with Lord Gyles Rosby. Tyrion sends Ser Jacelyn Bywater to secure Tommen at Rosby under Tyrion's influence.[8]

Lancel wants his own command[8] in the upcoming battle against Stannis Baratheon, Joffrey's uncle, which is granted.[16][17] His arm is wounded during the Battle of the Blackwater, and the sight of Lancel in his bloody surcoat causes some women in the Queen's Ballroom to scream. Lancel angrily objects to Cersei's demand to have Joffrey brought inside Maegor's Holdfast, as the king's disappearance from the battle would cause desertion among his defenders. Lancel offers to stay by Joffrey's side as long as the king remains in the fight, but the queen responds by striking his wound, which bleeds anew. Sansa Stark has a serving man bring Lancel to Maester Frenken for treatment.[18] Stannis's army is eventually defeated with the arrival of Lords Tywin Lannister and Mace Tyrell.[18]

For his services to Joffrey, Lancel is named the new Lord of Darry in the riverlands.[19] Cersei believes this is a sop by Tywin to Ser Kevan Lannister, his brother and Lancel's father.[20] It is feared that Lancel will lose his arm or even his life.[19]

Lancel suffers from an ulcerating wound which does not heal.[21] Kevan tells Tyrion that Lancel has praised Tyrion's efforts at the Blackwater, and that Cersei has been visiting his son's sickbed to pray for him.[22] Tywin considers wedding Lancel to Sansa, but Kevan does not feel Lancel would be healthy enough to consummate the marriage.[22] Tywin instead arranges for the girl to wed Tyrion.[23] With Lancel wounded and Martyn a prisoner of Robb Stark, Kevan becomes overcome with grief after Lord Rickard Karstark murders his third son, Willem Lannister.[21]

After the Red Wedding, Tywin tells Tyrion that Lancel must marry a girl from House Frey according to his alliance with Lord Walder Frey.[24]

Kevan brings Lancel from his sickbed to attend the wedding feast of King Joffrey and Margaery Tyrell. The thin Lancel is now ghastly looking, with white and brittle hair. Sansa praises Lancel's valor and strength, causing Lancel and Kevan to both beam. Father and son have seats of honor near the Iron Throne. Joffrey chokes to death during the feast, and Cersei accuses Tyrion of murder.[25]

Lord Petyr Baelish informs Sansa that he sent the Kettleblack brothers to King's Landing so they could be found by Bronn and Lancel.[26]

After Jaime frees Tyrion from the black cells to avoid execution for Joffrey's death, Tyrion tells his brother that their sister Cersei has been sleeping with various men, including Lancel. Tyrion kills their father, Lord Tywin, during his escape.[27]

Maester Ballabar helps treat Lancel as he recovers. A grey-faced Lancel attends the funeral of his uncle, Lord Tywin. Lancel tells Cersei that the High Septon prayed with him to help his recovery, and Lancel develops a new-found piety to the Faith of the Seven. Worried that Lancel might reveal her secrets, Cersei suggests that Lancel pray silently.[20] Lancel attends the wedding of King Tommen and Margaery.[28] It is rumored in King's Landing that Lancel's wounds have made him unable to reproduce.[6] The High Septon dies in his sleep;[29] unbeknownst to Lancel, Cersei has had the religious leader assassinated by Ser Osney Kettleblack.[30]

Ser Harwyn Plumm clears out broken men from Darry.[28] Jaime, bothered by Tyrion's claim that Cersei slept with Lancel, insults his cousin when Lancel departs King's Landing for Darry with his father and two septons.[31] Lancel quarters the lion of House Lannister with the plowman of House Darry on the arms of House Lannister of Darry.[6] Lancel weds Amerei Frey, but they do not consummate the marriage.[6]

Lancel is ambivalent as to rumors of the promiscuity of his new wife. Instead of his bedchamber, Lancel sleeps in the castle's sept. He commands his retainers to never disturb him during his prayers. The young lord is guarded by sparrows and Poor Fellows. Kevan departs Darry after quarreling with his son.[6]

Lancel prays in the sept instead of attending the welcoming feast when Jaime arrives at Darry. Jaime finds the barefoot Lancel looking like a beggar in his roughspun tunic and hair shirt. Lancel has shaved the crown of his head and has attempted to grow a beard. The fasting Lancel claims he receives visions from the Seven each night, and that he dreamed of being killed by Jaime after admitting to his sins. Lancel admits to having supplied King Robert with the strongwine and to having slept with Cersei, whom he loved. The young lord also says he had confessed his sins to the late High Septon. Lancel explains he is joining the High Sparrow and the Warrior's Sons, and that Harwyn can have Darry and Amerei after he renounces them. Jaime refuses his cousin's repeated requests to pray together.[6]

When Jaime arrives at the siege of Riverrun, Ser Daven Lannister is shocked to hear of their cousin's decisions, while Genna Lannister is not surprised.[32]

Cersei sees Lancel among the Warrior's Sons in the capital.[30]

Lancel is one of Cersei's accusers after she is arrested by the Faith. The imprisoned queen admits to the High Sparrow that she slept with Lancel, but she denies having conspired with Lancel to kill King Robert.[33] Under the command of Ser Theodan the True, Lancel makes up part of Cersei's escort in her walk of atonement.[34]

Kevan Lannister, the Lord Regent for King Tommen, considers naming his son Lancel to the Kingsguard. Kevan is assassinated by Varys, however.[35]

Lancel: Have a care how you speak to me, Imp.
Tyrion: Oh, unhand your sword. One cry from me and Shagga will burst in and kill you. With an axe, not a wineskin.[10]

Jaime: How long has it been since you've eaten?
Lancel: My faith is all the nourishment I need.[6]

Jaime: In any case, you're not like to be taken for Baelor the Blessed.


Lancel: No. He was a rare spirit, pure and brave and innocent, untouched by all the evils of the world. I am a sinner, with much and more to atone for.
Jaime: What do you know of sin, coz? I killed my king.


Lancel: The brave man slays with a sword, the craven with a wineskin. We are both kingslayers, ser.[6]
—Jaime Lannister and Lancel

I know the lad well. A stalwart boy, Ser Kevan Lannister's son, nephew to Lord Tywin and cousin to the queen. I hope the dear sweet lad does not blame himself. Children are so vulnerable in the innocence of their youth, how well do I remember.[11]

Look at him. Not quite so tall, his features not so fine, and his hair is sand instead of spun gold, yet still ... even a poor copy of Jaime is sweeter than an empty bed, I suppose.[5]

Though only seventeen, he might have passed for seventy; grey-faced, gaunt, with hollow cheeks, sunken eyes, and hair as white and brittle as chalk. How can Lancel be among the living when Tywin Lannister is dead? Have the gods taken leave of their wits?[20]

Cersei: Lancel loved me. He was half a boy, but I never doubted his devotion to me or my son.


High Sparrow: And yet you still corrupted him.


Cersei: I was lonely. I had lost my husband, my son, my lord father. I was regent, but a queen is still a woman, and women are weak vessels, easily tempted ... Your High Holiness knows the truth of that. Even holy septas have been known to sin. I took comfort with Lancel. He was kind and gentle and I needed someone.[33]
—Cersei Lannister and the High Sparrow

Lancel may be a reference by George R. R. Martin to Lancelot, one of the Knights of the Round Table who had an adulterous affair with Queen Guinevere.