A sept is a building where followers of the Faith of the Seven worship.[1] They can be in villages and urban settlements, castles, septries and motherhouses. 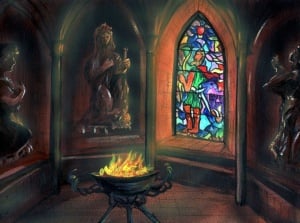 A sept is a single building with seven walls. Some septs are small and humble; others are large and magnificent, such as the Great Sept of Baelor. Some septs have crystal[2] or leaded windows.[3]

Every sept houses representational art portraying each of the seven aspects of the Faith. In rural septs, they may merely be carved masks or simple charcoal drawings on a wall,[4]; in wealthy septs they may be statues inlaid with precious metals and stones.

Worshipers light candles before the different altars symbolizing each of the seven aspects. Crystals spread seven-colored rainbows onto altars.[5]

Ceremonies are led by the highest ranking male member of the clergy, and hymns are often sung. In the naming of a child, seven oils are used to anoint the infant. Weddings are conducted standing between the altars of the Father and the Mother.

Rites of worship held in wealthy areas and during special occasions can feature embellishments such as choirs of seventy-seven septas.[6]

Knights traditionally stand vigil and are consecrated with seven oils in septs.[7] Brothers of the Night's Watch who worship the Seven can make their vows at the small sept at Castle Black.[5] The Sept-Beyond-the-Sea is a sept in Braavos for Westerosi.[8]

In the aftermath of the coming of the Andals, kings such as Merle I Gardener,[9] Humfrey I Teague,[10] and the Arryns[11] founded septs, septries and motherhouses throughout southern Westeros. King Theon Stark, a follower of the old gods, repelled an attack of Andals on the north and retaliated by raiding Andalos.[12] Septs in the Iron Islands have periodically been destroyed by worshippers of the Drowned God.[13]

Aegon the Conqueror is said to have prayed at the sept of Dragonstone before beginning the Conquest.[14] A sept was destroyed during Aegon's burning of Harrenhal.[15]

The Starry Sept in Oldtown was the seat of the High Septon for a thousand years.[16] The Sept of Remembrance was built in King's Landing after Aegon's Conquest, but it was destroyed by King Maegor the Cruel.[17] Eventually the High Septon moved from the Starry Sept to the Great Sept of Baelor in the capital.[16]

Lord Eddard Stark constructed a small sept at Winterfell for his southron wife, Catelyn Tully.[1] The sept at Lordsport was not rebuilt after its destruction during Greyjoy's Rebellion.[18]

King Joffrey I Baratheon orders the execution of Lord Eddard Stark outside the Great Sept of Baelor.[19]

Some of the Night's Watch pray in Castle Black's sept before embarking on the great ranging.[20]

The queen's men destroy the sept at Dragonstone, and Stannis Baratheon allows Melisandre to burn its statues.[14]

Many septs in the riverlands are destroyed during the War of the Five Kings.[21] Catelyn Stark prays at a small village during the siege of Storm's End.[4]

The royal sept at the Red Keep and Baelor's Sept are crowded during the Battle of the Blackwater.[2]

Catelyn's sept is burned during the sack of Winterfell.[22]

Arya Stark visits Stoney Sept with the brotherhood without banners.[23] Vargo Hoat leads a group of Brave Companions in sacking a sept in the riverlands.[3] Northmen seeking Ser Jaime Lannister burned the sept at Sallydance.[24] The sept at Lord Harroway's Town is flooded by the Trident.[25]

Joffrey weds Margaery Tyrell in the Great Sept of Baelor.[26]

The town's sept is destroyed during the raid on Saltpans.[27]

Obara Sand claims the septs of Dorne are full in the aftermath of Prince Oberyn Martell's death.[28]

Disinterested in his marriage to Amerei Frey or being the lord of Darry, Ser Lancel Lannister sleeps in the castle's sept.[30]

With Joffrey having died at his wedding feast, King Tommen I Baratheon marries Margaery in the Red Keep's royal sept.[31] Taena Merryweather tells Queen Cersei Lannister that one of her maids, Senelle, is a spy who relays information to Margaery's cousins in the royal sept.[31] The High Sparrow has Cersei taken into custody at Baelor's Sept.[32]

The bones of Ser Wendel Manderly are interred in the Sept of the Snows.[33]

Worship was a septon with a censer, the smell of incense, a seven-sided crystal alive with light, voices raised in song. The Tullys kept a godswood, as all the great houses did, but it was only a place to walk or read or lie in the sun. Worship was for the sept.[1]

When the first shaft of sunlight broke through the clouds to the east, morning bells began to peal from the Sailor's Sept down by the harbor. The Lord's Sept joined in a moment later, then the Seven Shrines from their gardens across the Honeywine, and finally the Starry Sept that had been the seat of the High Septon for a thousand years before Aegon landed at King's Landing. They made a mighty music.[16]

It is customary to take a finger from a thief, but a man who steals from a sept is stealing from the gods.[34]

—Randyll Tarly to a criminal