Honeywine
The Reach and the location of the Honeywine

The Honeywine is a large river in the Reach. According to a semi-canon source, its valley is the agricultural capital of the Reach.[1]

Guildhalls line the western banks of the Honeywine in Oldtown, while the Citadel spreads across both sides. Downstream are the Starry Sept and manses. The Seven Shrines and their gardens are also located near the Honeywine. The Quill and Tankard is located on an island in the river,[4] while the Ravenry is found on another.[5] A river road runs alongside the slow-moving Honeywine through the heart of the city.[5]

Maesters believe that men have lived at the mouth of the Honeywine since the Dawn Age.[6] A pirate lord raided river traffic from the Isle of Ravens during the Age of Heroes.[5]

During the Dance of the Dragons, the river was the site of the Battle of the Honeywine, which resulted in a victory for the greens over the blacks.[7] 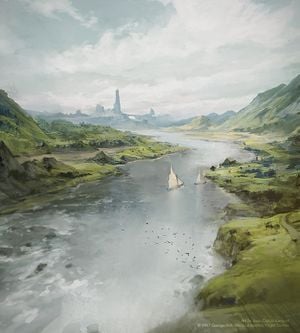 At the Quill and Tankard, Mollander throws apples into the air and Alleras attempts to shoot them with arrows before they fall into the Honeywine.[4]

After arriving in Oldtown, Samwell Tarly walks the river road along the Honeywine and passes the Weeping Dock.[5]

It is always warm in Oldtown. There is an inn on an island in the Honeywine where I used to go when I was a young novice. It will be pleasant to sit there once again, sipping cider.[8]