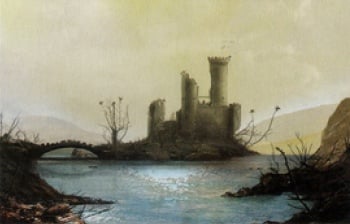 The Isle of Ravens on the Honeywine. © FFG

The Isle of Ravens is an isle located inside the Citadel in Oldtown. A weathered wooden drawbridge links the isle to the eastern bank of the Honeywine river.

The Ravenry, the oldest building in the Citadel, is a castle on the isle.[1] As the name suggests, ravens are housed there. There are separate rookeries, the white in the west tower and the black in the north tower, as the two colors of ravens quarrel.

In the Age of Heroes the Ravenry was supposedly the stronghold of a pirate lord who sat there robbing ships as they came down the Honeywine.[1] The drawbridge has not been raised in living memory.[1]

Samwell Tarly visits the Ravenry on the Isle of Ravens. It is cool and dim inside the Ravenry’s walls, which are covered in purple moss and creeping vines. An ancient, moss-covered weirwood fills the castle’s yard. Ravens fill not only the tree, but also the yard, windows, and battlements.

With Alleras as a guide, Sam learns that Archmaester Walgrave’s chambers are located in the west tower of the Ravenry, below the white raven rookery, while Archmaester Marwyn’s chambers are in the north tower behind a door of oak and iron. They are accessible through the north tower’s ground level door and up a flight of steps. Before entering Marwyn's chambers, Sam meets the rude Leo Tyrell. Marwyn’s room is large and round and has a hearth. There are books and scrolls everywhere, strewn across the tables and stacked up on the floor in piles four feet high. Faded tapestries and ragged maps cover the stone walls. The only light comes from a three feet tall black candle in the centre of the room.

The white ravens and the black ones quarrel like Dornishmen and Marchers, so they keep them apart.