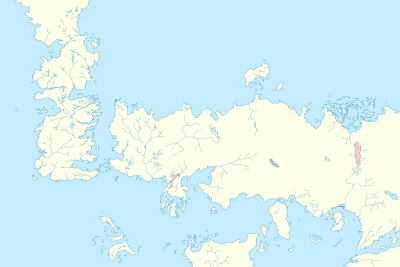 Leng
Location of Leng in the known world

Leng is a large island in the Jade Sea, off the southern coast of Essos. To the north is the city of Jinqi in Yi Ti. East of Leng are the Shadow Lands, while to the south are the Manticore Isles. The island of Marahai is to the southwest.[1] Leng is ruled by god-empresses.[2]

Leng is an island of forests and jungles, rich in spices and gemstones.[3] According to Lomas Longstrider, the verdant isle of Leng is home to "ten thousand tigers and ten million monkeys". The island is also famous for its great apes, including spotted humpback apes, almost as intelligent as men, and hooded apes, large as giants and very strong.[2] Some of the striped horselike creatures bred with horses by the Jogos Nhai to create zorses come from Leng.[4]

The city of Leng Ma is located on the central western coast,[5] Leng Yi is a principal town on the northern coast,[6] and Turrani is a port city on the southern shore.[7] The people of northern Leng are descended from Yi Ti, while the people of southern Leng, the Lengii, are a culture native to the island.[3] The YiTish descendants appear very similar to the people of the Golden Empire of Yi Ti, speaking a dialect of the YiTish language, praying to the same gods, eating the same foods, following the same customs. They even venerate the azure emperor in Yin, although they worship only the god-empress of Leng. Furthermore, Leng Ma and Leng Yi resemble YiTish cities in culture and design, whereas Turrani's Lengii culture is very different.[2]

In the depth of the island's jungles are strange ruined cities, with massive, fallen buildings. The buildings are so overgrown with plants that only rubble is visible, but underground are endless labyrinths of tunnels that lead to vast chambers, and carved steps descend hundreds of feet into the earth. No one knows when these cities were built or by whom, and perhaps they are the only thing remaining of some extinct people. Those who entered the underground ruins often returned mad, and even today it is forbidden to enter them, under penalty of death.[2]

Leng was an isolated island for most of its history, as the Lengii did not welcome outsiders. Those who attempted to harvest the island's resources met a foul end, and it thus was avoided by mariners. Leng became known as a haunt of demons and sorcerers, a closed island.[2]

Merchants from the Golden Empire of Yi Ti periodically managed to open Leng to trade. However, according to the Jade Compendium, the Old Ones who lived below the island's subterranean ruins instructed the Empress of Leng to kill the foreign merchants on at least four occasions. Leng was eventually conquered by Jar Har, the sixth sea-green emperor of Yi Ti. He sealed the entrances to the underground cities and ordered them to be forgotten, after which there were no more massacres. The YiTish colonized most of the island, with the Lengii confined to the southern third.[2]

Leng overthrew YiTish rule four hundred years ago, and power returned to the god-empresses. Khiara the Great established a tradition whereby the empress takes two husbands, one each of Lengii and YiTish descent, with one commanding the island's armies and the other its fleet.[2]

Some of the great wealth acquired by Lord Corlys Velaryon during his nine voyages was from Leng.[8] In 111 AC or 112 AC, Prince Daemon Targaryen gifted his niece Princess Rhaenyra with a jade tiara said to have belonged to the Empress of Leng.[9][10]

The island's name may be a reference by George R. R. Martin to H. P. Lovecraft's Leng.