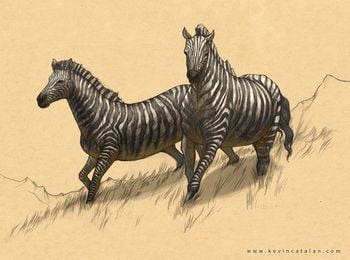 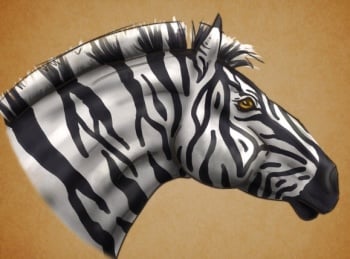 Head profile of a zorse, by MalinaIthil ©

A zorse is a striped black-and-white equine from the eastern continent of Essos.[1]

Zorses are bred by the Jogos Nhai, who live on the plains north of Yi Ti, east of the Dothraki sea and the Bone Mountains, which are too dry and not fertile enough to provide sustenance for horses. Zorses were originally created by crossing horses with a striped, horse-like animal found in southern Yi Ti and Leng (likely the equivalent of zebras), but are now bred as if they were their own species.[2]

Zorses have been described as fierce[3] and foul-tempered.[2] They are hardy beasts, supposedly capable of surviving on weeds and devilgrass for many months, and are able to travel long distances without water or fodder.[2]

The Jogos Nhai drink fermented zorse milk.[2] The outermost of the triple walls of Qarth is decorated with pictures of animals, including zorses.[4] Zorse hides are considered to be a fine trade good.[5] 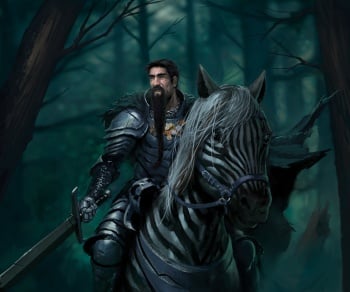 In the Eastern Market of Vaes Dothrak, Daenerys Targaryen sees the striped black and white horses of the Jogos Nhai.[6]

While at Harrenhal, Arya Stark witnesses the arrival of the Brave Companions and sees that some of them ride strange black-and-white horses, including their captain, Vargo Hoat.[1]

In Qarth, a pair of Jogos Nhai present Daenerys with one of their striped zorses, as a token to the Mother of Dragons. Dany sells the zorse, along with other gifts received in Qarth, in order to gather wealth needed to petition the Pureborn.[3]

A mile from the gates of Harrenhal, Ser Jaime Lannister and Brienne of Tarth are tied to the pommel of Vargo Hoat's saddle so that he can parade Jaime into the castle. Jaime and Brienne stumble along side by side behind the Qohorik's striped zorse.[7]

A zorse is not the narrative's equivalent of a real-world zebra, but rather the same as the "zorse", the real-world term for a horse-zebra hybrid. While the zorses bred by the Jogos Nhai are fertile, real-life zorses are sterile, like most animal hybrids.