Dogs are domesticated canines in the known world similar to the real-life animal. Other canines include direwolves, foxes, and wolves. Dog breeds include elkhound,[1] mastiff,[2] sand dog,[3] shaggy dog,[4] sheepdog,[4] and wolfhound.[4] Hellhounds are mythical canines.[5] 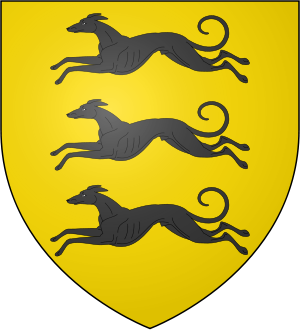 The arms of House Clegane

A domesticated species, dogs can be kept as pets by humans.[6] Kennelmasters are people appointed to be in charged of the training and care of a castle's hunting hounds.

Dog's Nose is a war galley in the royal fleet.[7]

The Painted Dogs are one of the Vale mountain clans of the Mountains of the Moon.[8][9]

In the Jogos Nhai culture, the young men steal goats, dogs, and zorses from other bands.[10]

No dogs or other animals survive long in Asshai.[11]

Men of the Frozen Shore ride sleds pulled by hounds as big as ponies.[12][13]

Other characters known to have a dog-related nickname include Ser Joffrey Doggett the "Red Dog of the Hills",[21] Harma Dogshead,[22] Rorge the "Mad Dog of Saltpans",[23] and Dogkiller.[24]

The inhabitants of Mardosh were forced to eat their dogs when their city was besieged by Dothraki khalasars.[26]

The feelings of Targaryen princelings towards dogs varied from fear (Aerea at first[21]) to love (Rhaena,[21] Viserra,[27] and Saera[27]) to indifference (Maegor).[21]

Harren the Red fed the genitals of Lord Gargon Qoherys to a dog before killing him.[21]

After the death of Queen Tyanna of the Tower, rumors spread of King Maegor feeding her hearts to his dogs.[21]

Prior to the Maiden's Day Ball, rumors spread of Rosamund Darry having six nipples because her mother had supposedly lain with a dog.[29]

During the winter of 134 AC northmen in the winter town ate dogs and horses to avoid starvation.[30]

Ser Duncan the Tall buried his old stot, Chestnut, deep in the sand of Dorne to avoid it being found and eaten by sand dogs.[3]

Sand dogs must eat and feed their pups. His flesh will feed the dogs or feed the sands. In a year, his bones will be scoured clean. This is Dorne, my friend.[3]

—A Dornish knight to Duncan the Tall