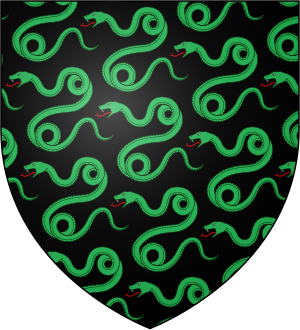 Snakewood is the seat of House Lynderly as well as a forest in the Vale of Arryn.[12][13] The Milk Snakes are one of the Vale mountain clans of the Mountains of the Moon.[14][15]

A serpent god is worshipped in the lost city of Lyber.[16]

Dornishmen are fond of adding snake venom to their wine[10] and food.[17] As a result they are often compared to snakes by other Westerosi.[18][10]

A mystery knight known as The Serpent in Scalet entered the tourney at the Golden Wedding and was ultimitely revealed to be Jonquil Darke, the bastard daughter of Lord Darklyn.[22] Lord Corlys Velaryon was the greatest seafarer the Seven Kingdoms had ever known.[23] He was best known as the Sea Snake, a nickname he got from his ship.[24] Lady Serala of Myr was known as The Lace Serpent.[25] Prince Oberyn Martell earns his nickname The Red Viper after using poisoned blades during a duel to first blood with Lord Edgar Yronwood, killing the old lord in the process.[26] Oberyn's eight bastard daughters are collectively known as the Sand Snakes.[17] Stonesnake is a veteran ranger of the Night's Watch.[27] Senerra She-Snake is a pit fighter in Meereen.[28]

After being captured, Ser Aemon Targaryen was put naked in a crow cage above a pit filled with vipers by Lord Wyl.[29]

After fleeing King's Landing, Arya Stark repeats to herself phrases Syrio Forel taught her, "Quick as a snake." being one of them.[30][8][31]