A falcon is included in the arms of House Arryn

Falcons are birds of prey similar to real-life falcons. Like hawks, captive falcons can be used for hunting by falconers[1] or be kept as pets.[2]

Falcons are especially prevalent near the Eyrie and the Giant's Lance.[3][4][5] The sigil of House Arryn, Lords of the Eyrie, is a sky-blue falcon outlined against a white moon on a sky-blue field.[6][7] Lord Jon Arryn's favorite bird was a falcon gifted to him by King Robert I Baratheon,[2] and his longsword has a falcon-head pommel.[8] Ser Vardis Egen, captain of the House Arryn guards, has falcon's wings on his helm, the visor of which resembles a beak.[8] The Falcon Tower is one of the towers of the Gates of the Moon.[9]

The mews of Harrenhal are said to be haunted by the spirits of dead falcons.[10] 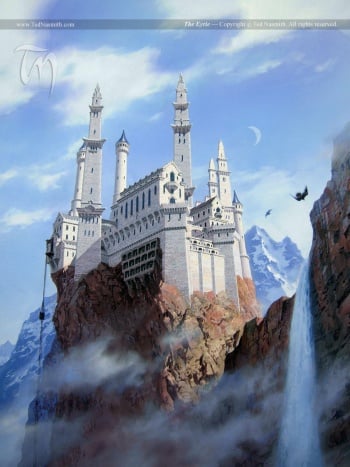 Falcons flying near the Eyrie, by Ted Nasmith ©

According to legend, the Winged Knight flew on a huge falcon to the top of the Giant's Lance, where he then defeated the Griffin King.[5] Archmaester Perestan suggests this to be a distorted memory of dragonriders, however.[6]

Falcon's wings decorated the silver warhelm of Ser Artys Arryn, the Falcon Knight.[11] The Kings of Mountain and Vale from House Arryn wore the Falcon Crown.[2] King Osgood Arryn was known as the Old Falcon.[12]

Isembard Arryn, a merchant from House Arryn of Gulltown, became known as the Gilded Falcon after men joked that the falcon on his sigil was made of gold.[13]

A potboy tells Jory Cassel that Lord Jon Arryn had been considering commissioning plate wrought in pale silver with a blue jasper falcon and a mother-of-pearl moon on the breast. When Lord Eddard Stark asks Tobho Mott if he made a falcon helm for Lord Arryn, the smith explains that Jon and Lord Stannis Baratheon did not patronize his work, but instead were interested in one of his blacksmiths.[15]

In mourning for the death of her husband, Lady Lysa Arryn wears black silk with a moon-and-falcon sewn in pearls.[16]

When they go hawking in the kingswood, Sansa Stark's merlin catches three ducks, and Margaery Tyrell's peregrine takes a heron in full flight.[17]

The wedding chalice given by Lord Mace Tyrell to King Joffrey I Baratheon has a falcon of blue jade to represent House Arryn.[18]

While looking upon the Giant's Lance from the Eyrie, Sansa sees a blue-winged falcon soaring above a frozen waterfall.[2]

After the court of Lord Robert Arryn, the Young Falcon, departs the Eyrie for the Gates of the Moon, Mord butchers the winch oxen and leaves them for the falcons.[5]

Each competitor in the tourney to choose the Brotherhood of Winged Knights receives a cloak of cloth-of-silver and a lapis brooch in the shape of a pair of falcon's wings. The eight victors are to receive warhelms decorated with falcon's wings.[9]

And finally, up where the falcons soared, a flash of white in the moonlight. Vertigo washed over her as she stared upward at the pale towers, so far above.[4]