From A Wiki of Ice and Fire
Jump to: navigation, search
For the garrison of the City Watch of King's Landing at the Lion Gate, see Lions. 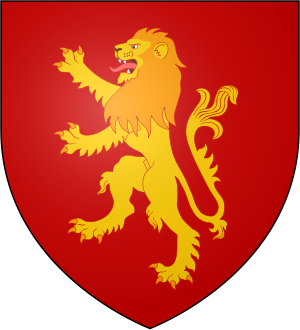 The sigil of House Lannister depicts a golden lion.

The lion is similar to a real life lion. A hrakkar is a great white lion found in the Dothraki sea of Essos.

Westerosi sigils depicting lions or lions' heads include those of Houses Casterly,[1] Grandison, Jast, Lannister, Osgrey, Parren, and Reyne. The sigil of House Manning includes a sea lion.[2] Men of the westerlands can be called lions because of the Lannisters' sigil.[3][4] The Lion Gate at King's Landing opens to the Goldroad.[5] Ser Leo Costayne was known as the Sea Lion.[6]

The Lion of Night is a deity worshipped in parts of Essos, including Braavos[7] and Asshai.[8]

The garrison of the City Watch of King's Landing stationed at the Lion Gate is called the "Lions".[9]

The wood dancers of the children of the forest are said to have called upon cave lions to fight on their behalf.[10]

Lions inhabited the western hills of Westeros. In antiquity, lions made dens in Casterly Rock itself[11] and some were owned by the Kings of the Rock. According to a semi-canon source, some of King Loreon I Lannister's lions broke free and slew three of his sons, some say as a curse from Morgon Banefort.[12]

Sandoq the Shadow is said to have slain lions, bears, wolves, and wyverns in the fighting pits of Meereen.[13]

Wild lions were seen during the reign of Lord Tytos Lannister, as the first knight of House Clegane saved Tytos from a lioness and lost a leg and three dogs in the effort.[14] Cersei Lannister recalls several caged lions kept in the bowels of Casterly Rock during her childhood, a legacy of her grandfather Tytos's time.[15]

The Prince of Pentos keeps a pride of lions in his menagerie.[16] Khal Drogo hunts and slays a hrakkar of the Dothraki sea.[17]

The handmaids of Daenerys Targaryen make her a cloak from the hrakkar's pelt.[18]

In 300 AC, Leaf tells Bran Stark the great lions of the western hills have been slain.[19] According to a semi-canon source, a few lions survive in the outlying hills of the westerlands, but they have been hunted down for the most part.[11]

Cersei Lannister remembers the restless caged lions of her youth kept in the bowels of Casterly Rock, and how she worked up the courage to touch one while her brother Jaime pulled her away.[15]