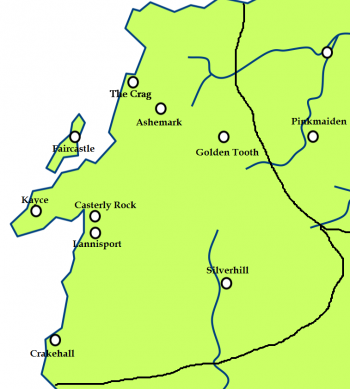 Lannisport
The westerlands and the location of Lannisport

Lannisport is a walled city in the westerlands located less than a mile south of Casterly Rock, the seat of House Lannister.[1] Lannisport is located along the coast of the Sunset Sea where the river road, the gold road, and the ocean road meet.[2] It is one of the major ports of the Seven Kingdoms and is the largest settlement in the westerlands. Lannisport is smaller than King's Landing or Oldtown, but larger than Gulltown or White Harbor.[3]

Lannisport is protected by a ring of walls, high and strong.[7] The city is renowned for its goldwork and goldsmiths[8][9] and produces a spiced honey wine.[10] Lannisport is policed by the well-trained City Watch.[11] The city has a great motherhouse.[12] Like King's Landing, Lannisport has higher quality brothels.[13] Merchants from Lannisport often trade with their counterparts in the Free Cities.[14]

Kingdom of the Rock

According to a semi-canon source, a lesser branch of House Lannister of Casterly Rock developed a village a mile from Casterly Rock into first a town and then a city,[4] as the fertile vicinity has a natural harbor with abundant fish. While the Lannisters of Lannisport fortified the city, the Lannisters of Casterly Rock became the Kings of the Rock. By the time of the coming of the Andals, the only city in Westeros larger than Lannisport was Oldtown. It is said that King Loreon V Lannister, nicknamed Queen Lorea, disguised himself as a whore and wandered the docks of the city.[17] Roland I Arryn visited Lannisport in his youth before becoming King of Mountain and Vale.[18]

Due to the city's proximity to the Iron Islands, wealthy Lannisport has often been a target for their attacks,[17] being burned at least three times and raided two dozen times over the centuries.[19] After being mutilated by the Shrike, Lelia Lannister was sent from the Iron Islands back to Lannisport, which led to years of warfare between the ironborn and the westermen.[20] Ironborn sailors have also traded at Lannisport during more peaceful times.[20] 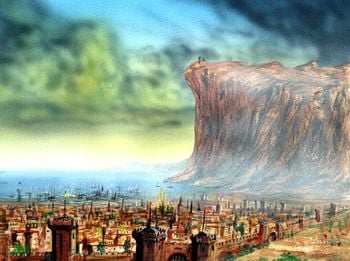 Accounts differ whether Aegon Targaryen visited Lannisport prior to the Conquest.[21] The war fleet of Lannisport participated in his invasion of the Iron Islands in 2 AC.[22] Queen Rhaenys Targaryen found a knight in Lannisport who was willing to foster the bastard of a Rowan girl in her service.[7] King Aegon I visited Lannisport during his royal progresses,[7] as did King Aenys I Targaryen during one of his.[23]

Melony Piper and her brothers swore the loyalty of House Piper to Aegon the Uncrowned at Lannisport after King Maegor I Targaryen claimed the Iron Throne.[23] Ser Joffrey Doggett led the chapter of Warrior's Sons in Lannisport during the Faith Militant uprising, and Ser Tyler Hill led five hundred westermen from the city to support Aegon against Maegor.[23] After Aegon and Melony were killed in the Battle Beneath the Gods Eye, Princess Rhaena Targaryen fled to Lannisport and then Fair Isle.[23] Queen Elinor Costayne gave up all claims to nobility later in life, becoming Mother Elinor at the motherhouse in Lannisport.[12]

Lannisport, Oldtown, and King's Landing were included in the new tax laws of Edwell Celtigar, Lord of Claw Isle and master of coin for King Jaehaerys Targaryen.[24] Lannisport grew during Jaehaerys's reign, although not as quickly as King's Landing.[25] The king visited Lannisport during his royal progress in 55 AC.[25]

Corlys Velaryon visited Oldtown, Lannisport, and Lordsport during his youth.[26]

During the Dance of the Dragons, Lannisport supported the greens of King Aegon II Targaryen.[27] Dalton Greyjoy, the Lord of the Iron Islands known as the Red Kraken, sacked the city in 130 AC, capturing three-quarters of Lannisport's fleet and sinking the rest. Six hundred women and girls, including the favorite mistress of Lord Jason Lannister and his natural daughters, were taken as salt wives.[28] One of Dalton's salt wives was a Lannister of Lannisport.[29] Ser Emory Hill, the Bastard of Lannisport, was killed in the Battle by the Lakeshore.[30] 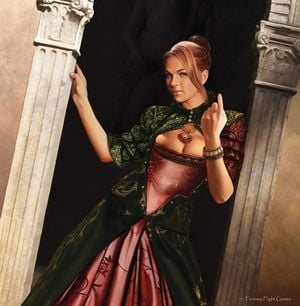 During the regency of Aegon III, Ser Tyland Lannister ordered the construction of huge fortified granaries in Lannisport, King's Landing, and Gulltown.[31]

Lord Jason's widow, Lady Johanna Lannister, led men from Lannisport and Casterly Rock to save Kayce from Dalton's ironborn.[31] Lord Unwin Peake tasked Alyn Velaryon, Lord of the Tides, with defeating Dalton and restoring peace to the westerlands. Dalton was killed at Faircastle by Tess while Alyn was sailing to the west, however. When Alyn's Lady Baela arrived at Lannisport, the city's bells rang to honor him and thousands cheered him from the shore.[29] Before returning to the crownlands, Alyn left a third of his fleet at Lannisport with Ser Leo Costayne to guard against the ironborn.[29]

Johanna sent Leo to intervene in the struggle for power in the Iron Islands in 134 AC,[32] and westermen brought back spoils of war and highborn hostages to Lannisport.[33] Trade expanded in Lannisport during the Lysene Spring.[32]

Ser Arlan of Pennytree once unhorsed the Grey Lion, Damon Lannister, in a tourney at Lannisport.[34] Arlan and his squire, the later Ser Duncan the Tall, also helped escort a Dornish merchant from Lannisport to the Prince's Pass.[34] Duncan learned to kiss from a Lannisport tavern girl in 208 AC.[34]

Ser Quentyn Ball attacked the city during the First Blackfyre Rebellion, slaying Lord Lefford outside its gates[35] and forcing Damon into retreat.[36] During the Great Spring Sickness, Lannisport was among the cities hit hardest.[37]

Trade in Lannisport increased greatly during the rule of Lord Gerold Lannister.[36]

Having succeeding Lord Tytos, Lord Tywin Lannister sent his father's mistress through the streets of Lannisport naked in disgrace.[38][39]

For parts of 267 AC and 268 AC, King Aerys II Targaryen and his Hand of the King, Tywin, ruled the Seven Kingdoms while residing at Lannisport and Casterly Rock. Tywin gained the support of powerful merchants by reducing tariffs and taxes on the shipping of Lannisport, King's Landing, and Oldtown. Aerys later tripled the port fees of Lannisport against Tywin's advice, however, and when the king reversed course Tywin was blamed by the merchants for the brief increase.[40]

Lannisport hosted the tournament in honor of Viserys's birth in 276 AC.[40] Around 286 AC, Tysha was saved from outlaws by Ser Jaime Lannister and Tyrion Lannister while the brothers were returning from Lannisport.[41] Many townsfolk of Lannisport went to Maggy the Frog for portions.[42][43] A moneylender in Lannisport, by Patrick Keith © Fantasy Flight Games

During Greyjoy's Rebellion, the ironmen, led by Euron and Victarion Greyjoy, sailed into the harbor at Lannisport and burned the Lannister fleet at anchor.[15] Aeron Greyjoy was captured after the sea battle off Fair Isle, taken to Lannisport in chains, and spent the rest of the war imprisoned in Casterly Rock.[44] Robert's forces sailed from Lannisport and Seagard to invade the Iron Islands.[45]

At the end of the war, in celebration of their victory over House Greyjoy, King Robert I Baratheon ordered a tourney to be held. The city was the site of the tourney at Lannisport of 289 AC, where Ser Jorah Mormont, Lord of Bear Island, won the hand of Lynesse Hightower.[46] After returning to Bear Island, Jorah hired a harper from Lannisport in an attempt to impress Lynesse,[46] and the couple also returned to the city for festivals and fairs.[46]

Asha Greyjoy and Qarl the Maid stopped at Lannisport during their trading voyage to the Arbor.[47]

Lord Sawane Botley bought a stallion at Lannisport in 298 AC.[15]

Lannisport with Casterly Rock in the distance, by reneaigner©

When the Iron Throne forces Ser Barristan Selmy to leave the Kingsguard, the small council states that Lord Tywin Lannister offers him land north of Lannisport upon which to retire. The aged knight rejects the offer, however.[49] Tywin later disapproves of the decision to remove Barristan from the Kingsguard.[50]

Ser Stafford Lannister gathers a new host of westermen, including green boys from the stews of Lannisport, to Casterly Rock.[51]

Theon Greyjoy wants his father Balon, Lord of the Iron Islands, to attack undefended Lannisport, as he expects Stafford to be occupied with Theon's friend, Robb Stark, the new King in the North.[52] Balon instead attacks the north and declares himself King of the Isles and the North.[53]

After Stafford is killed by Robb's northmen in the Battle of Oxcross, the shattered remnants of his force fall back to Lannisport to regroup.[54] 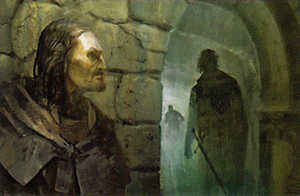 Lady Genna Lannister brings the singer Whitesmile Wat from Lannisport to the siege of Riverrun by Daven, the new Warden of the West.[56]

Queen Regent Cersei Lannister ponders the creation of the Golden Bank of Lannisport to compete with the Iron Bank of Braavos.[43]

The crew of the Shy Maid is told that Tyrion is Hugor Hill, also called Yollo,[57] a bastard from Lannisport.[58] Tyrion recalls having seen an elephant in Lannisport's menagerie when he was a boy.[59] With the Rock, he could hold Lannisport and the golden lands of the west. It would mean wealth and power such as House Greyjoy had never known.[52]

Roro Uhoris, the Cobblecat's cranky old master, used to claim that he could tell one port from another just by the way they smelled. Cities were like women, he insisted; each one had its own unique scent. Oldtown was as flowery as a perfumed dowager. Lannisport was a milkmaid, fresh and earthy, with woodsmoke in her hair. King's Landing reeked like some unwashed whore. But White Harbor's scent was sharp and salty, and a little fishy too.[60]