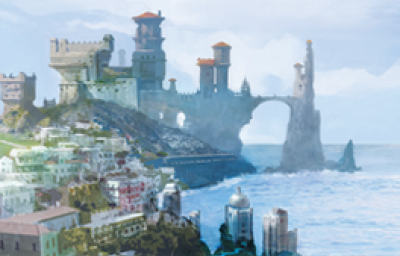 Seagard
The riverlands and the location of Seagard (red)[1]

Seagard is a town in the northern riverlands, and its castle is the seat of House Mallister. Located on the western coast along Ironman's Bay, Seagard is sheltered by the Cape of Eagles and is nestled near the headwaters of the Blue Fork.[2] It is southwest of the Twins and northwest of Oldstones.[3]

The Booming Tower of Seagard is named for its immense bronze bell, which is used to call the townsfolk and others into the safety of the castle when longships are sighted.[4] The Mallisters have a small fleet of six longships and two war galleys to defend the region.[5]

The castle of Seagard was built to defend the coast from ironborn reavers, especially Greyjoys from Pyke.[4] After the fall of House Justman, the Mallisters of Seagard contested rule of the riverlands with rival petty kings.[6]

Harwyn Hardhand, King of the Iron Islands, landed his longships forty leagues south of Seagard at the start of his campaign to conquer the riverlands from the Storm King Arrec Durrandon.[6]

During Greyjoy's Rebellion, the bronze bell of the Booming Tower rang for the first time in three hundred years, when Rodrik Greyjoy led the storming of Seagard. Lord Jason Mallister killed Rodrik beneath the castle walls and threw the ironmen back into the sea.[4] King Robert I Baratheon's army sailed from Seagard and Lannisport to subdue the Iron Islands and end the rebellion.[7]

Catelyn Tully, Lysa Tully, and Petyr Baelish visited Seagard in their youth, once camping at Oldstones on the way there with Lord Hoster Tully.[5] The Tully sisters briefly became lost during a foggy ride back to Riverrun, but they were found by their father's ward, Petyr.[8]

Ser Kevan Lannister notes that the Mallisters of Seagard and the Freys of the Twins are the only standing threats to the Lannister campaign in the riverlands. Lord Tywin Lannister disregards them, stating that Lord Walder Frey will not take the field when victory is doubtful and that Lord Jason Mallister is not strong enough to fight alone.[9]

Seagard is said to be one of the only riverland keeps still mercifully untouched by the War of the Five Kings.[10] Wendel Frey serves as a page at the castle.[11]

Some Lannister captives from the Whispering Wood and Battle of the Camps, including Lord Gawen Westerling,[11] are brought from Riverrun to Seagard by Lord Jason and his son, Patrek.[10][4] Theon Greyjoy accompanies the Mallisters during their ride to Seagard, and Jason warns his son against befriending an ironborn. Theon boards the Myraham at Seagard and sails for the Iron Islands.[4]

After Robb Stark, the King in the North and King of the Trident, weds Jeyne Westerling at the Crag, the king orders the release of Jeyne's father, Gawen, from captivity at Seagard.[12]

The Myraham returns to Seagard from Lordsport, bringing word of the death of Balon Greyjoy, the King of the Isles and the North and Theon's father, and the return of Balon's exiled brother, Euron, who has claimed the Seastone Chair.[5]

Robb intends to have his mother, Lady Catelyn Stark, travel to Seagard for protection,[5] but both are killed beforehand at the Red Wedding.[13] Lord Tywin Lannister expects House Frey will pen up Lord Jason in the siege of Seagard.[14] The Iron Throne later hears that Seagard has yielded to Black Walder Frey.[15]

Ser Jaime Lannister learns from Ser Ryman Frey that Lord Jason surrendered Seagard and swore fealty to the Iron Throne only when Black Walder threatened to hang Patrek Mallister, a captive from the Red Wedding, if his father refused to surrender.[16]

After Ryman is hanged south of Fairmarket, Edwyn Frey places blame for his father's death on Black Walder, even though his younger brother is away at Seagard.[17]

Jason and Patrek are imprisoned in their own castle.[18]