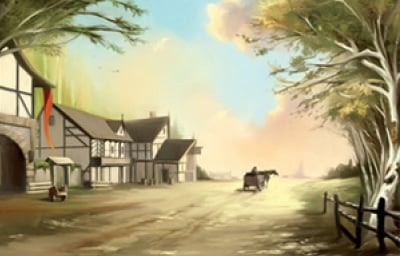 The kingsroad is the main overland route in the Seven Kingdoms, extending for almost two thousand miles from Storm's End through King's Landing to the Wall. It is not as impressive as the great Valyrian roads of the past, but overall it increases mobility and speeds of travel.

See also: Images of the Kingsroad

The kingsroad's quality varies from place to place. Its main section is between King's Landing and the Neck and sustains numerous inns and villages along its length. Just north of King's Landing, the grand road is initially little more than two narrow dirt tracks, winding back and forth on itself.[1] To pass through the Neck it becomes a causeway. North of the Neck and south of King's Landing the road winds down. Inns exist, but they are farther apart and much less able to accommodate large parties. 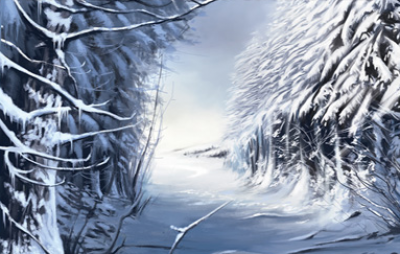 The kingsroad in the north, by Julepe © Fantasy Flight Games

The kingsroad begins in the stormlands at Storm's End on Shipbreaker Bay.[2] It runs northwest past Bronzegate and through the kingswood to the Blackwater Rush, opposite the River Gate of King's Landing in the crownlands. Ferries transport travelers across the Blackwater, as there is no bridge across the river at the capital.[3][4]

At King's Landing the kingsroad is met by the Goldroad coming from the westerlands and the roseroad from the Reach. The kingsroad continues north through the capital's Gate of the Gods and passes east of the Gods Eye and by Harrenhal in the riverlands.[5]

The causeway of the kingsroad is the only safe way through the Neck, although the crannogmen know of other routes through the swampy terrain. The formidable ruins of Moat Cailin guard the northern edge of the Neck.[7]

After Moat Cailin, the kingsroad travels north through the barrowlands, the southeastern wolfswood, and a tributary of the White Knife to Winterfell, the seat of House Stark in the north. Once the kingsroad moves beyond Winterfell, inns are still available and farms are guarded by holdfasts. West of the road lie the flint foothills of the northern mountains and to the east are rolling plains.[8] Three days ride north of Winterfell the road becomes more sparsely travelled, journeying through the northeastern wolfswood with farms and holdfasts growing scarcer and smaller[8] and then after that the road goes west of Long Lake and Last Hearth.

After leaving the lands of House Umber, the kingsroad enters the territory of the Night's Watch, passing through the Gift and near Queenscrown.[9] The kingsroad passes Mole's Town and ends at Castle Black at the Wall.[10] Near the Wall it is a twisty ribbon,[11] narrow, stony, and pocked with weeds.[12]

During winter, food has been brought to the north from the south via the kingsroad.[14]

The Battle of the Kingsroad between Lord Borros Baratheon and the Lads was the last battle of the Dance of the Dragons.[15] Lord Cregan Stark led a great host of northmen to King's Landing, leading to the Hour of the Wolf.[16] Since many northmen remained to attend Widow Fairs, Cregan returned north on the kingsroad with a much smaller host.[17] Ser Robert Rowan led a host up the kingsroad to the high road to end the war of succession in the Vale of Arryn.[18]

During Robert's Rebellion, Prince Lewyn Martell led ten thousand Dornishmen on the kingsroad to the Trident.[19] 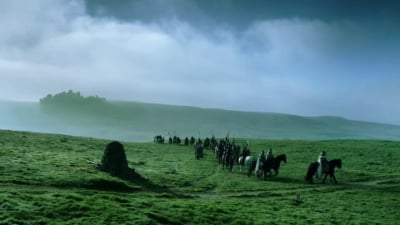 The kingsroad north of Winterfell, as depicted in Game of Thrones.

King Robert I Baratheon's retinue travels the kingsroad to offer the position of Hand of the King to Eddard Stark, Lord of Winterfell,[20][21] and they return to King's Landing the same way.[22][23]

Traffic on the kingsroad south of the Neck intensifies in anticipation of the Hand's tourney. Blaming Tyrion for an attempt on her son Bran's life, Catelyn abducts the returning Tyrion at the crossroads inn.[6]

With Ned Stark arrested by the Iron Throne after the death of Robert, Robb Stark gathers northmen to Winterfell. His host is joined by other bannermen as they travel south along the kingsroad.[24][7] With the outbreak of war, Lord Tywin Lannister, Tyrion's father, closes off the kingsroad in the riverlands.[7] Commanding Robb's foot, Lord Roose Bolton marches south on the kingsroad but is defeated in the battle on the Green Fork.[25]

Yoren brings a group of recruits for the Night's Watch, including Arya Stark and Gendry, from King's Landing.[26] They depart from the kingsroad for the Gods Eye, however, because of the numerous soldiers and gold cloaks along the road.[27][1] The kingsroad and Gods Eye become ravaged by warfare between Lannisters and rivermen.[28][29]

Following the sack of Winterfell, soldiers from House Bolton search the kingsroad for the missing Bran and Rickon Stark.[32]

Prince Oberyn Martell leads nine of the most powerful lords of Dorne to King's Landing along the kingsroad.[33]

A hundred Thenns and sixteen raiders of the free folk travel up the kingsroad to attack the Night's Watch from the south.[34]

In the aftermath of the Red Wedding, Lord Randyll Tarly controls the kingsroad in the riverlands and crownlands.[35]

Traveling from Castle Black to Mole's Town, Jon Snow observes newly-carved heart trees overlooking the kingsroad.[37] Alys Karstark is found two leagues south of the village,[38] after which Jon intercepts Cregan Karstark's party on the kingsroad before they can claim guest right.[39]

Ramsay Bolton has the executed ironborn garrison nailed to posts on the kingsroad after the siege of Moat Cailin is resolved.[40] The surrender of the ruined castle allows Roose Bolton to march his host from the riverlands to Winterfell.[41]

The kingsroad near Winterfell is blanketed by snowfall from a fierce blizzard,[42] making it impassable.[39]

My lady, let me accompany you at least. The kingsroad can be perilous for a woman alone.[43]

The kingsroad can be perilous this far north.[44]

These days, the sea is safer than the kingsroad.[45]

I'd stay well clear of that kingsroad, if I were you. It's worse than bad, I hear. Wolves and lions both, and bands of broken men preying on anyone they can catch.[46]

—peasant to Brienne of Tarth, Jaime Lannister, and Cleos Frey

When there was a Stark in Winterfell, a maiden girl could walk the kingsroad in her name-day gown and still go unmolested, and travelers could find fire, bread, and salt at many an inn and holdfast. But the nights are colder now, and doors are closed. There's squids in the wolfswood, and flayed men ride the kingsroad asking after strangers.[32]

—a Liddle to Bran Stark, Meera Reed, and Jojen Reed