Gorge
The north and the location of the Gorge

The Gorge is a large, deep gorge that separates the Wall from the Bay of Ice.[1] Wildling raiders from beyond the Wall descend into the dark Gorge to bypass the Wall and enter the Seven Kingdoms.[2]

Crossing the Gorge is the Bridge of Skulls. Around it and below it are many rocks, and it stands over at least one pool of water. Nearby is Westwatch-by-the-Bridge, an unoccupied castle of the Night's Watch. The Milkwater appears to flow through the Gorge to the Bay of Ice.[3] 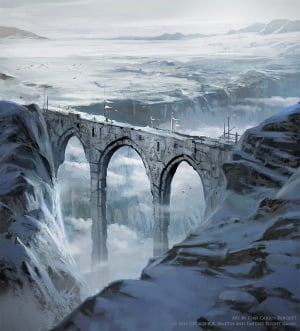 The Gorge, spanned by the Bridge of Skulls, by Juan Carlos Barquet © Fantasy Flight Games

A wildling captured in the Gorge by Qhorin Halfhand claims that Mance Rayder is gathering the free folk to a secret stronghold beyond the Wall.[4]

Bowen Marsh commands the Night's Watch against the wildlings of the Weeper in a fight at the Bridge of Skulls and the gloomy Gorge.[5]

The commander of the Shadow Tower, Ser Denys Mallister, writes to Castle Black to report sightings of fires in the night north of the Gorge.[6] Denys believes wildlings are amassing to force the Bridge of Skulls once more.[7]