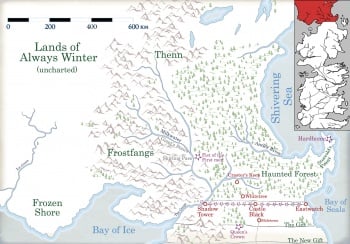 The Frostfangs are a mountain range in the far northwest of the continent of Westeros, beyond the Wall and north of the Seven Kingdoms. 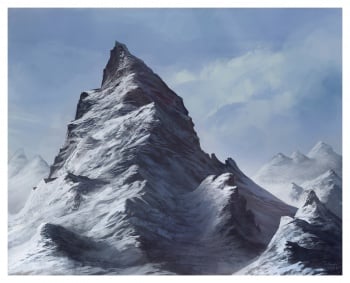 The Frostfangs lie north of the Wall, just northwest of the Shadow Tower, separating the Lands of Always Winter to their west and the haunted forest to their east. Its southern peaks and foothills transition into the northern mountains, which are part of the north within the Seven Kingdoms.[1] One of the largest mountains in the Frostfangs is called Forktop by the Night's Watch.[2]

The Frostfangs are a cruel and inhospitable wilderness of stone and ice, blue-grey in color with snow-capped peaks.[3][4] However, the mountains conceal a diverse series of wonders. Icy waterfalls plunge over sheer stone cliffs, great lakes reflect snowy peaks, there are ravines so deep and black they seem to go all the way to hell, and bridges of natural stone span distances with only the sky to either side.[2]

The foothills of the Frostfangs have numerous winding valleys.[5] The easiest way into the mountains is to follow the Milkwater to its source, but this path is visible from the Fist of the First Men. Other paths into the Frostfangs include the Giant's Stair and the Skirling Pass, if it is clear.[3]

Hidden valleys sustaining small numbers of people exist in the Frostfangs.[6] The Thenns live in one such valley in the northern Frostfangs.[7][8] Wildflowers, coldsnaps, frostfires, and piper's grass grow in the mountain meadows.[4]

Some free folk are said to worship dark gods beneath the Frostfangs.[9] 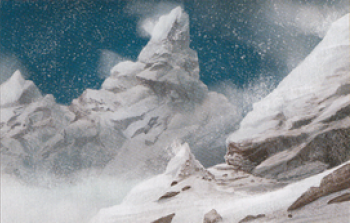 Craster informs Jeor Mormont, Lord Commander of the Night's Watch, that Mance Rayder, King-Beyond-the-Wall, is gathering the bulk of the free folk into the Frostfangs. Jeor does not expect the wildlings to remain in the inhospitable mountains for long.[6] Qhorin Halfhand's rangers defeat Alfyn Crowkiller's wildlings, although a few flee toward the Frostfangs. A captured wildling informs Qhorin that Mance is searching for something to help bring down the Wall.[10]

The Night's Watch send three scouting missions to search for Mance: one up the Giant's Stair under Jarman Buckwell, one to probe the Milkwater under Thoren Smallwood, and one into the Skirling Pass under Qhorin Halfhand.[10]

In the Skirling Pass, Jon Snow and Stonesnake are sent ahead to dispatch with lookouts; they kill two and Jon captures Ygritte, later releasing her rather than execute her.[4] After discovering the free folk's location, the party turn back leaving Dalbridge to cover their retreat.[2]

Orell's eagle follows the black brothers.[2] Qhorin sends Ebben ahead on horseback, and Stonesnake afoot up the mountainside. The Halfhand commands Jon to yield to the wildlings and do whatever is asked of him in order to gain their trust and learn what they are searching for. When the free folk finally overtake them, Jon yields as he was instructed and kills Qhorin.[11]

Jon Snow is brought before Mance Rayder.[12] The free folk host departs the Frostfangs via the Milkwater.[13]

Mance is said to have found the Horn of Joramun in a glacier among the Frostfangs,[14] but Tormund insists Mance did not find the true horn.[15]

Ser Denys Mallister writes that his rangers have spotted great camps of wildlings in the mountains beyond the Shadow Tower.[16]

The Frostfangs are cruel, inhospitable, a wilderness of stone and ice. They will not long sustain any great number of people.[6]

On the horizon stood the mountains like a great shadow, range on range of them receding into the blue-grey distance, their jagged peaks sheathed eternally in snow. Even from afar they looked vast and cold and inhospitable.[3]

Chett: It's an old man's folly, this ranging. We'll find nothing but our graves in them mountains.
Lark: There's giants in the Frostfangs, and wargs, and worse things.[10]

The Frostfangs were as cruel as any place the gods had made, and as inimical to men. The wind cut like a knife up here, and shrilled in the night like a mother mourning her slain children. What few trees they saw were stunted, grotesque things growing sideways out of cracks and fissures. Tumbled shelves of rock often overhung the trail, fringed with hanging icicles that looked like long white teeth from a distance.[17]

The mountain is your mother. Cling to her, press your face up against her teats, and she won't drop you.[4]

According to George R. R. Martin, the Frostfangs are reminiscent of the Himalayas.[18]