From A Wiki of Ice and Fire
Jump to: navigation, search
"Qhorin" redirects here. For the Lord of Volmark, see Qhorin Volmark.

Qhorin, known as Qhorin Halfhand and the Halfhand,[4] is a ranger of the Night's Watch and second-in-command at the Shadow Tower. In the television adaptation Game of Thrones he is portrayed by Simon Armstrong.

Qhorin Halfhand is a tall like a spear[5] and with shrewd grey eyes.[6] His hard, flat cheeks are clean-shaven.[5] Qhorin lost all fingers but the thumb and forefinger on his right hand to a wildling axe.[5] He wears his grey hair in a long, heavy braid.[5][7] He sits cross-legged.[5][7]

The courageous[8] Halfhand speaks quietly and deliberately, but can fight quickly and savagely.[5][7] A living legend in the Night's Watch,[7] Qhorin is one of their best rangers.[5] He is hated by many of the free folk who live beyond the Wall.[7][9] Unlike many brothers of the Watch, Qhorin is able to respect the positive qualities of wildlings.[6]

Qhorin lost all the fingers on his right hand except his thumb and forefinger after catching a wildling axe before it would strike his skull. Qhorin then thrust his maimed hand into his adversary's face and slew the man while he was blinded by blood.[5] The Halfhand trained how to fight left-handed and became just as proficient with his left hand as he had been with his right.[7] Qhorin has explored deep into the lands beyond the Wall.[5]

Qhorin was a good friend to Mance Rayder before Mance deserted the Night's Watch.[6] The Halfhand also knows Eddard Stark, Lord of Winterfell, and his late father, Lord Rickard Stark.[5] 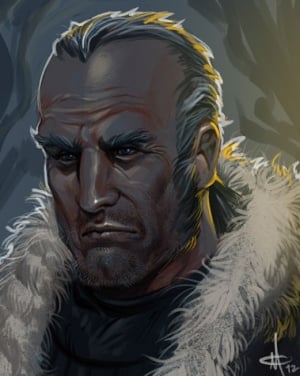 Qhorin is placed in command of a hundred men from the Shadow Tower charged to meet up with Jeor Mormont, Lord Commander of the Night's Watch, during the great ranging in search of Benjen Stark. On the way to the rendezvous, Qhorin's men run into a wildling scouting party led by Alfyn Crowkiller, which they practically destroys at the cost of four dead and a dozen wounded. A prisoner taken in the battle reveals that Mance Rayder was in the Frostfangs searching for some magic to bring down the Wall.[5]

When Qhorin meets Lord Commander Mormont at the Fist of the First Men, he advises sending three scouting parties into the mountains to discover what Mance was looking for, one of which he leads personally.[5] Qhorin's party is composed of Dalbridge, Ebben, Stonesnake, and Jon Snow.[4] Qhorin personally requests the participation of Jon, who had been serving as Jeor's steward.[5]

Qhorin's rangers enter the Skirling Pass. Stonesnake and Jon kill a small party of wildlings with the exception of Ygritte, whom Jon takes captive after she yields. Qhorin allows Jon to choose Ygritte's fate, and Jon eventually decides to let her go free;[4] Qhorin is not surprised by Jon's decision.[6]

When the rangers are spotted by the eagle of Orell, Qhorin decides that they must retreat. Qhorin leaves Dalbridge at a strong position,[6] but the skilled bowman is eventually killed by wildlings. Qhorin sends Ebben to ride with all haste back to the Fist, while the other rangers draw off the pursuing wildlings. Qhorin sends Stonesnake to climb the Frostfangs by himself.[7]

Realizing that he and Jon will eventually be overtaken, Qhorin has Jon recite the oath of the Night's Watch together with him. Qhorin orders Jon to yield if they are caught, in order to act as a spy. Rattleshirt's band catches up with them, and a spearwife shows them Ebben's head. When Jon yields as previously ordered, Ygritte vouches for him. Rattleshirt tells Jon to prove his sincerity by killing Qhorin, and the Halfhand immediately attacks the younger man. Ghost distracts Qhorin by biting his calf, and Jon slashes the ranger's throat with Longclaw; Rattleshirt is displeased by Jon's direwolf having aided him in the fight. The wildlings burn Qhorin's body, with Rattleshirt taking some bones for himself.[7]

Ygritte wears Qhorin's cloak as her own, while Lenyl takes his hauberk, Ragwyle his gloves, and a bowman his boots. Longspear Ryk gives Qhorin's helm to Ygritte since it does not fit him.[9] Styr is unhappy after learning of Qhorin's death; like Rattleshirt, he had wanted to kill the Halfhand himself. Mance Rayder tells Jon that he was once Qhorin's friend. While Mance admits that he himself is easily tempted by the charms of women, he compares Qhorin, a man loyal to the vows of the Night's Watch, to carved old oak.[9]

After the attack on Castle Black, the captured Rattleshirt tells Ser Alliser Thorne and Janos Slynt that Jon had begged for his life in the Frostfangs. When Qhorin tried to kill Jon as a craven, Ghost attacked the Halfhand and Jon then opened his throat. Alliser and Janos disbelieve Jon's story of Qhorin's last command. [10] Stannis Baratheon does believe Jon after the battle beneath the Wall, however.[11] While gathering support for Jon to be chosen as the new Lord Commander, Samwell Tarly reminds Ser Denys Mallister that Qhorin had trusted Jon.[12]

When Jon suffers a nightmare, Qhorin is among the men cut down by the new Lord Commander of the Night's Watch.[13]

Jeor: I am loath to risk more men.
Qhorin: We can only die. Why else do we don these black cloaks, but to die in defense of the realm?[5]

To lead men you must know them, Jon Snow. I know more of you now than I did this morning.[6]

If we are taken, you will go over to them, as the wildling girl you captured once urged you. They may demand that you cut your cloak to ribbons, that you swear them an oath on your father's grave, that you curse your brothers and your Lord Commander. You must not balk, whatever is asked of you. Do as they bid you ... but in your heart, remember who and what you are. Ride with them, eat with them, fight with them, for as long as it takes. And watch.[7]

The Halfhand had ventured deeper into the wild than any other living man.[5]

I will see, and hear, and learn, and when I have I will carry the word back to the Wall. The wildlings had taken him for an oathbreaker, but in his heart he was still a man of the Night's Watch, doing the last duty that Qhorin Halfhand had laid on him. Before I killed him.[9]

The Halfhand could have killed me as easy as you swat a bug.[14]

Qhorin on the Game of Thrones wiki.